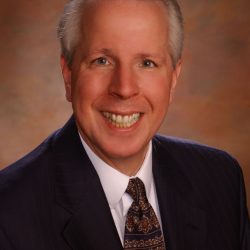 Mr. Wilson first began his work with Berks Youth Chorus [then Berks Classical Children’s Chorus] as a Staff Assistant in 1992, the year the chorus was founded. From spring 1994 through spring 1995, he directed the Choristers [then Prep Chorus]. In 1995-1996, he took time off to complete a Master of Music degree from Westminster Choir College, but returned to direct the Choristers in fall 1996. In spring 1997, he was appointed Director of Chorale, a position he held through the fall concert in November 2003. In 1998, Mr. Wilson conducted the Chorale in a performance for the Eastern Division Convention of the American Choral Directors Association in Providence, Rhode Island.

Mr. Wilson is listed in the 1994 edition of Who’s Who Among America’s Teachers and was a 1990 nominee for Pennsylvania Teacher of the Year. In June 2017, he retired from Schuylkill Elementary School in the Phoenixville Area School District near Valley Forge, Pennsylvania, after a career of teaching there for 36 years. His school choir performed at the 1991 Eastern Conference of PMEA/MENC [Pennsylvania Music Educators Association/Music Educators National Conference]. His article “What Do They Hear? Can We Really Make Beautiful Music?” appeared in the PMEA News in May 1994. Since 1999, Mr. Wilson has served as the Choir Director at Christ Episcopal Church, Reading, Pennsylvania, and, since 2011, he has also served as organist at the church.

BYC is a premier choral ensemble that offers high quality vocal instruction for children and youth in grades three through twelve who want to learn to sing – or just sing better. Members enjoy the company of dozens of singers from throughout Berks County. They perform classical, musical theater, and world music under the guidance of professional musicians, study vocal technique, and learn sight singing, study skills and music theory.

The concert season is supported by Pennsylvania Council on the Arts, a state agency, and Reading Musical Foundation.