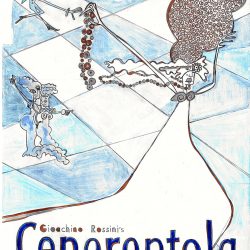 Rossini’s take on the classic fairy tale, Cinderella, La Cenerentola, is considered to be one of his greatest operatic achievements. A captivating confection of hilarity from beginning to end, it will delight audiences of all ages!

A free pre-performance lecture by David Richie will start approximately 45 minutes before each performance.

Royal courtiers arrive to announce a ball where the prince will choose a bride. Clorinda and Thisbe are overjoyed, positive they will be chosen and Don Magnifico imagines a great improvement to his finances. Cinderella is not permitted to attend.

Meanwhile, Alidora suggests the prince check out the lovely maid in Don Magnifico’s house and so Prince Ramiro arrrives disguised as his valet, Dandini. He and Cinderella are immediately drawn to one another. Dandini, disguised as the prince arrives as well. He asks about a third daughter and is informed that she is dead.

At the palace, the ball is underway. Dandini, posing as the prince, curries Don Magnifico’s favor, granting him a sham office as his official wine steward. Clorinda and Thisbe totally snub the real prince, dressed as a servant. Suddenly a beautiful woman resembling Cinderella appears and the crowd is overwhelmed.

Magnifico, still hopeful that a royal alliance for one of his daughters will solve his financial woes, daydreams of future grandeur.

Prince Ramiro (still in a servants disguise,) asks Cinderella to marry him. She shyly hands him a bracelet saying that if he recognizes her at their next meeting when she wears its twin, she’ll know his love is true and will marry him.

Ramiro informs Dandini that it’s time to end the charade and call an end to the party, however Dandini is interrupted by Magnifico who rudely insists the prince chose one of his daughters. At this point, Dandini, thoroughly disgusted, reveals his true identity and has Magnifico booted out of the palace.

Back home, Cinderella once again sings her sad song. The stepsisters and Magnifico rail against her with contempt as she reminds them of the lovely woman who spoiled all their plans.

The weather clears after a violent storm as a knock is heard at the door. The prince was caught in the storm and his carriage conveniently overturned near their house (an event orchestrated by Alidoro). Cinderella and the prince recognize each other, as the prince sees the bracelet on her wrist matching his. He announces to all that she is his chosen bride.

Magnifico and his daughters are furious but Alidoro settles them down. The prince, angry at the abuses Cinderella has suffered at her family’s hands, nonetheless leaves their fate up to Angelina (Cinderella’s true name). Sweet girl that she is, she kindly forgives them.

The opera closes with a brilliant and joyful aria sung by Angelina and the chorus.