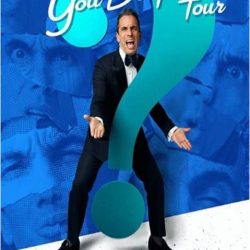 Let’s face it: in our increasingly tepid, polite and politically correct culture we need more people like Sebastian Maniscalco. Forever able to seize the moment, never failing to speak his mind, always telling it like it is, this is one man who isn’t afraid to put it all out there. This unapologetic honesty is what has fans across America showing up in droves for his shows, and now Sebastian Maniscalco continues spreading his laughs across the U.S. on his WHY WOULD YOU DO THAT? TOUR coming to Santander Performing Arts Center in Reading on Saturday, September 23 at 7:00 pm.The WHY WOULD YOU DO THAT? TOUR will contribute to the Tag You’re It! Foundation, Maniscalco’s own charity, by donating $1 for every ticket sold. The fund, set up through the California Community Foundation, strives to support research in Alzheimer’s disease, children’s education and the U.S. military.Distinguished by the New York Times as having his “own kind of panache,” Maniscalco is a success story resulting from years of hard work and a keen self-awareness of innate talent. A natural born-storyteller, one constantly regaling his family with madcap tales at the dinner table, Maniscalco moved to Los Angeles in 1998 and began pounding the pavement on his comedic quest. There, he employed the work ethic his father instilled in him to build his name – simultaneously working as a waiter at the Four Seasons Hotel – and eventually drew the attention of actor Vince Vaughn, who cast him in Vince Vaughn’s Wild West Comedy Show.Today, SebastianManiscalco sits as one of the premier standup comedians who always stays busy. He is the comedian behind highly successful network specials including last year’s “Why Would You Do That?,” “What’s Wrong With People?,” and “Aren’t You Embarrassed?”Following a massive standup tour of theaters last year, the coming months are monumental ones for the 2016 Just for Laughs Stand Up Comedian of the Year. In addition to starring in his own wildly popular SiriusXM program, “The Pete and Sebastian Show,” Maniscalco will make several major motion picture appearances in the coming year. Notably, a voice-over role in the animated feature “Nut Job 2,” premiering this year; a role in the New Line Feature comedy “The House” starring Will Ferrell and Amy Poehler (directed by Andrew Cohen); and a turn in the independent drama “Cruise” directed by Rob Siegel and produced by Jeremy Renner.Date: SATURDAY, SEPTEMBER 23 AT 7:00 PM                     Location: SANTANDER PERFORMING ARTS CENTERSales Locations: VF OUTLET BOX OFFICE, ALL TICKETMASTER OUTLETS, TICKETMASTER.COM, CHARGE BY PHONE: 800-745-3000On Sale: FRIDAY, JULY 21 AT 10:00 AM