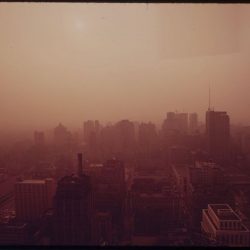 HARRISBURG, Pa. – A new analysis ranks Pennsylvania high on the list of areas where smog and pollen combine to threaten respiratory health. The Natural Resources Defense Council’s mapping project puts the Keystone State at number five for the percentage of its population subject to the “double whammy” of smog and ragweed pollen. According to Kim Knowlton, senior scientist at NRDC, the production of ozone, which irritates the lungs, is accelerated by the warmer temperatures caused by carbon pollution. Higher concentrations of carbon dioxide in the air also have a direct impact on allergy sufferers.”Ragweed loves it,” she states. “Ragweed grows more lush, more profuse and, unfortunately, it produces significantly more pollen.”The report says, nationally, 127 million people, 4 out of every 10 Americans, live in counties with high concentrations of ozone smog and pollen.Knowlton says 76 percent of the population of Pennsylvania lived in counties that had both unhealthy ozone days and ragweed. And the state has more than its fair share of cities rated as “asthma capitals” by the Asthma and Allergy Foundation of America.”In 2015, the year that we looked at, Pennsylvania had five cities in the top 50: Philadelphia, Allentown, Pittsburgh, Scranton and Harrisburg,” she relates.Knowlton adds that asthma and allergies combined lead to more sick days, higher medical costs and increased heart problems and premature deaths each year.Knowlton points out that, despite moves by the Trump administration and Congress to roll back regulations that cut carbon emissions, efforts to deal with climate change are continuing in many states. And, she says, Pennsylvania has taken some important steps.”Pennsylvania is among just a third of the states in the U.S. that have a climate action plan that includes measures that deal with public health,” she states.The NRDC analysis suggests several steps individuals and state and local governments can take to head off what it calls a climate-propelled public health crisis.