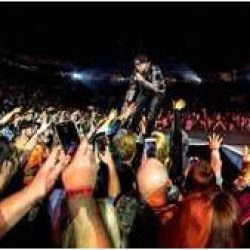 The SMG-managed Santander Arena and Santander Performing Arts Center hosted an all-time record of 275 events during the recently completed fiscal year, July 1, 2016-June 30, 2017, including nine sold out events.  Concert headliners such as Eric Church, Miranda Lambert and Marc Anthony brought in fans from all over Eastern Pennsylvania, including the Berks County region and beyond. Over 420,000 fans crossed the threshold of these downtown Reading, PA venues to enjoy everything from concerts to legendary comedian Mel Brooks; from the Harlem Globetrotters to Reading Royals Hockey; and from the Illusionists to the Reading Symphony Orchestra.  Adding to the calendar, the Santander Arena hosted multiple dates of Pennsylvania High School Basketball Playoffs in partnership with the Pennsylvania Interscholastic Athletic Association.

“It’s been a non-stop year for us here!” commented David Farrar, General Manager of both facilities. “When you have the support of the ticket buying public and the dedicated staff that we have here, it’s easy to prove to promoters and agents that their artists will enjoy performing here. What we do behind the scenes ensures that these artists keep coming back and that our audiences get the best show possible!”

Also contributing to the venues’ 2016-17 success was increased revenue generated by various facility departments. Group sales increased over 40% from the prior year’s results, contributing nearly $200,000 in added revenue. Over 7,000 visitors attended from groups such as tour and travel agencies, senior centers, church groups, and local businesses. Additionally, Dinner on the Mezz, an exclusive pre-show dinner option offered right at the two venues, contributed another $50,000 in revenue.

All of this, when paired with additional catering revenue generated from SMG’s exclusive catering branch, SAVOR, and with revenue generated from the Arena’s fully leased, twenty-one luxury suites, has set a new standard for the Santander Arena and Santander Performing Arts Center for seasons to come. “We have some great, new initiatives set to roll out to maintain this momentum into the 2017-2018 year,” said Farrar, “so stay tuned!”