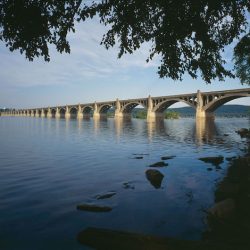 HARRISBURG, Pa. – The Brunner Island power plant must stop contaminating the Susquehanna River, according to a message delivered by local residents to the Department of Environmental Protection.A hearing Monday evening marked the close of the public comment period on a draft water permit that would let the coal-fired power plant continue discharging water with pollutants from coal ash until 2023.According to Patrick Grenter, senior campaign representative for the Sierra Club, the plant’s last water permit expired more than five years ago and the current draft would allow the plant to keep discharging waste containing arsenic, mercury and selenium into the river.”The technologies needed to control these toxics are widely available; it’s easily installed,”he said. “Coal plants around the country have done so, years ago.”The owners of Brunner Island have been retrofitting the plant to burn natural gas, which could eliminate the toxic discharges. However, Grenter said, the plant could make that switch now.”The fact that this plant has the ability right now to stop this toxic pollution further underlines why it’s just completely inappropriate for the DEP to give this company an additional six years to pollute,” he said.The Susquehanna River provides drinking water for about 6 million people.Water pollution isn’t the only problem. Connecticut and Delaware have filed complaints with the Environmental Protection Agency over Brunner Island’s emissions of smog-forming nitrogen oxides. By allowing the pollution to continue, Grenter said, the DEP would be subsidizing the plant.”If they’re forced to internalize the cost of their pollution,: he said, “it’s become more and more clear that they can’t compete with clean, renewable sources like wind and solar.”The DEP has said it will evaluate all the written and oral comments on the draft water permit before issuing its decision.The draft permit is online at dep.pa.gov.