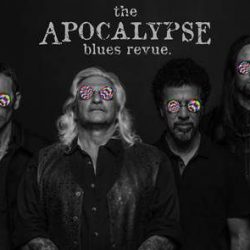 NOTE: The Bandshell concert scheduled for Friday, July 28, is moving to The Inn at Reading due to thunderstorms predicted for the afternoon and evening. Refreshments will be available for purchase from The Inn at Reading. No outside food or beverage permitted.

The 2017 Bandshell Concert Season wraps up on Friday, July 28 with The Apocalypse Blues Revue (TABR).

TABR was co-founded by drummer Shannon Larkin and guitarist Tony Rombola, both members of the hard rock band Godsmack. On tour in 2010 and tired of metal and hard rock, Larkin and Rombola discovered one another’s affinity for the Blues and would jam without boundaries. Rombola describes TABR’s sound as merging traditional Blues and heavier elements.

According to Larkin, “Apocalypse Blues Review is a little heavier and a little darker, and has some punk rock attitude in the lyrics.” The band cut its self-titled debut album in 2016. “The musicianship is exemplary, the lyrics thought provoking, and the overall feeling, ominous,” said American Blues Scene. http://www.theapocalypsebluesrevue.com/

Preshow entertainment will be provided by the RIZE Hip Hop Academy starting at 6:15 p.m.