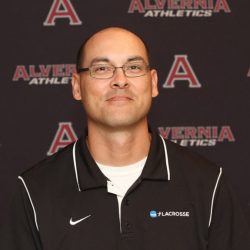 Alvernia University has announced the hiring of Carl Haas as their next head coach of the men’s lacrosse program.

“Carl’s experience rebuilding and starting the programs at St. Vincent and DePauw, respectively, jumped off his resume as did his experience as the top assistant at Roanoke – one of the best programs in Division III,” said Director of Athletics, Bill Stiles.

Haas comes to Alvernia having most recently served as the first assistant at Ohio Northern University.

“I am very excited to be part of the Alvernia University family,” said Haas. “I truly enjoyed my time at ONU and I want to thank Coach St. Laurent for the opportunity to be part of his great program the past year. I wish to thank Mr. Stiles and the search committee for giving me this opportunity and look forward to helping the Golden Wolves take the next step as a program.”

Haas spent five years on the coaching staff at Roanoke College after starting his coaching career with a brief stop at St. Andrews Presbyterian College. With Haas on staff, the Maroons put together a run of three straight seasons with 15 or more wins, and were perennial NCAA qualifiers.

Following his time at Roanoke, Haas spent a year as an assistant coach at St. Vincent before being promoted to head coach in 2009. He led the Bearcats to a 5-7 season in 2010 and followed with a 9-5 mark in 2011.

In 2012 Haas took on the challenge of taking the club team at DePauw University to varsity status. The Tigers took their lumps in the first season going 0-14, picked up three wins in the second season, then posted back-to-back 6-9 records before Haas accepted an offer from Nat St. Laurent to join him at Ohio Northern last August.

“Everyone with whom I spoke said the same things about Carl. He’s a man of great character, has a high lacrosse IQ, and is a great recruiter. That skill set makes him the ideal candidate for this position,” said Stiles.

The Golden Wolves compete in the MAC Commonwealth and return a pair of All-Conference performers in rising junior Jarret Abernethy and sophomore Colin Wall. Each of the top three goal-scorers returns with Andrew Ritchie (24 g, 20 a) and Sam St. Croix (23 g, 5 a) joining Abernethy (32 g, 4 a).