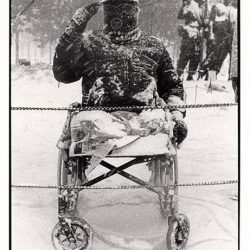 Reading, PA – GoggleWorks Center for the Arts (GoggleWorks) is pleased to present Retrospective, an exhibition by John Elder, in the Irvin & Lois Cohen Gallery (east) from September 1 through October 15, 2017.

John Edler explains, “Before I became a photographer, I did not know what the word passion meant. I didn’t truly understand what it meant to ‘go all out’, 100%, to be ‘all in’, committed, to love an activity and a subject. Photography changed my life. It changed the way I see, what I see, and my perception of that seen. I simply look at the world differently than before I became a photographer.

I have a large body of work that can be broadly broken down into four categories. First, there is street photography photographed almost exclusively with a 35mm Leica rangefinder. Second are abstracts taken on the street usually while doing street photography. These abstracts are in a category of their own because they are not concerned with the human condition. Third, is my medium format photography, inanimate and somewhat abstract in nature, of all kinds of subject matter, united and connected by my vision. This simply means that when you see this group of medium format images you can tell they belong together. Fourth, is Portraiture, taken both in and out of the studio and with all types of film cameras and equipment.”

John took his first photograph in May 1982 after his parents gave him a Nikon for his 29th birthday. A year and a half later he quit practicing law to pursue photography. He entered Rochester Institute of Technology (R.I.T.) in the fall of 1985 and graduated with honors in May 1987, with a B.F.A. in photography. While at R.I.T. in 1986, Elder won a university competition for a photo internship with the Maryland Department of Natural Resources. He photographed numerous subjects in and around the Chesapeake Bay for the Public Relations Department. In 1987 and 1988, he was employed as staff photographer for Close Up Foundation in Washington, D.C., where he photographed National public events and Congressmen and Senators at work.

While working at Close Up Foundation, John was recommended by R.I.T. Professor of Photography Guenther Cartwright for selection in Eddie Adams’ First Annual Workshop. Eddie Adams was the Pulitzer Prize winning photographer of the now famous execution photo that helped change American opinion of the Vietnam War. In a national competition of twelve hundred applicants, Elder was among one hundred selected and attended the workshop in the fall of 1988.

From 1988 to the present, Elder has pursued both law and photography. John Elder has participated in solo and group exhibitions throughout southeastern Pennsylvania. Elder had a solo show at the Philadelphia Art Alliance in the fall of 1998. Elder had a solo show at the Henry Gregg Gallery in March-April 2009, New York City. He received an Honorable Mention in The Photo Review 2011 Competition, and therefore had one of the thirteen pieces displayed in the “Best of Show” exhibit at the University of Arts, 2011, Philadelphia. Pa. His solo show, John Elder Street Photographer, was named in the Top Ten of 2012 in Visual Arts by The Reading Eagle.

GoggleWorks will hold an opening reception for Retrospective in the Cohen Gallery during Spotlight Night, on September 1st from 5:30-7:30pm. The evening will also include a fall course preview, where guests can meet several of the artist instructors. Visit several teaching studios, watch them demonstrate their technique and get your questions answered. Plus, register onsite this evening for a 5+ week course and receive a free basic GoggleWorks membership ($50 value), as well as 15% off tuition.