A Legendary Barber in the City Closes Shop 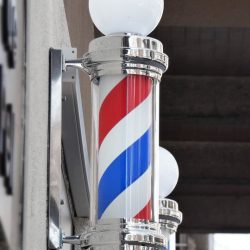 Rocco Cambria has been a barber in the City of Reading since the late 1950’s.  He has had the honor of cutting virtually every mayor’s hair in the city since 1959 with the exception of two mayors, Karen Miller and Vaughn Spencer.

Rocco was named after his grandfather who immigrated from Sicily in the early part of the 20th century.  His grandfather was not a barber, but all of his three sons became barbers and his only daughter’s children also became barbers.  All in all there have been 17 Cambrias that have cut hair in the area with a combined experience of over 800 years.  Now the only Cambria shop in Berks County is in Exeter Township on Perkiomen Avenue, owned by Nino Cambria, Rocco’s cousin.

Rocco’s shop was right next to City Hall on Washington Street for many years.  Walking into the shop was like walking back in time to the 1950’s.  Everything in the shop was from that era and Rocco certainly was, as well.  He almost always had WEEU on at the shop.  He was just a classic, barber’s barber.  He really knew how to talk to people.

Many of Rocco’s customers were faithful customers over 30 years or more.  It was amazing who you would run into at the shop, former Mayor’s and all kinds of interesting people. I was a short-timer, only a customer of a 11 years.  Probably our favorite topic was politics.  Rocco really had that wise sage persona from dealing with people in the chair for almost 60 years.  I remember once it was the day before the election between McCain and Obama and I asked Rocco who he wanted to win the election and he responded, “No matter who wins.  I gotta get up and cut hair in the morning.”

When I worked at 69 News, I had always wanted to do a story on Rocco, but he didn’t want to do it.   He didn’t really want the exposure.  The people he wanted to know where his shop was knew where he was, and he really wasn’t interested beyond that.  The phone number for his shop wasn’t even listed.

The closing of his shop was a surprise to me.  I’ve been to the shop a few times over the past few weeks and finally met the new owner of the shop the other day.  The Cambria Barbershop lettering was down from the main window.  I went over to Nino Cambria’s shop on Perkiomen Avenue which has been there since 1962.  I guess that’s my new barber, but I will greatly miss Rocco Cambria, as I’m sure many will, as well.