Studio B Fine Art Gallery, Boyertown is pleased to announce the opening of “Asia Pacific” 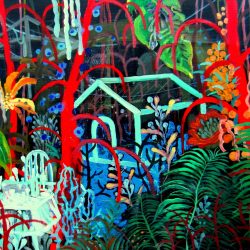 “Who am I and where did I come from? How did I get here and what has influenced me to become who I am? What do I hope to accomplish? What are my challenges and how have I been a challenge to others?

“These and other questions will be addressed in a cultural exchange hosted by Studio B Fine Art Gallery during an exhibit of art of international artists from New Zealand, Thailand and South Korea,” announced Jane Stahl, Studio B’s Director of Community Relations.

“We are grateful to Tessi Melchior, executive director for the Foundation for Boyertown Education, who coordinated the fundraising through the generosity of Body-Borneman Insurance Company, the United Way of Boyertown, the Melchior Family, and Fred Beans Ford of Boyertown,” Stahl continued.

Studio B Fine Art Gallery, 39A East Philadelphia Avenue in Boyertown, PA, is pleased to announce the opening of “Asia Pacific,” an exhibition of art from international artists from the Asian Pacific Rim, on Friday, August 25, 2017, from 5:00 p.m.-8:00 p.m. The exhibit will run through September 9, 2017.

The exhibit representing 7 artists is curated by Chutima Kerdpitak, known as Nok, a multidisciplinary artist born in Thailand and currently living in the United Kingdom. Several other artists will accompany Nok as part of the exchange.

This is Nok’s second visit and exhibit in Boyertown. In 2013, Kerdpitak brought the works of over 60 international artists to Boyertown for an exhibit entitled “Circus Terminal Worldwide.”

Demonstrations, workshops and discussions are also planned for the community. The artists will be available as guest speakers for arts organizations, civic and service clubs.

“The insight into the lives and culture of artists from around the world—through their work and their presence in our rural small town—is of immeasurable value in the education of our young people,” continued Stahl.

“How often does one have a chance to learn directly from folks of another country on the other side of the world?” she queried. “The challenges facing our world today require collaboration within the global community. Conflicts continue to threaten every corner of the world.

“As we develop stronger friendships with these artists who call themselves ‘outsider artists’ we enjoy a unique opportunity to compare and contrast our world and theirs and create a better understanding and increased appreciation of one another toward building a better, and more peaceful, world community,” Stahl concluded.

Kerdpitak’s own artwork that she describes as “manipulation of the mainstream versus freedom of choice” is in “found objects,” sculptural installation, mixed media and painting and comes from her personal journey through discouragement—common among artists—to the “YES”—encouragement she found through sharing with other artists.

Her own renaissance resulted in her taking on the role of curator—visiting and mounting exhibits featuring the work of dozens of artists around the world—and in realizing that these opportunities inspired confidence in other passionate and dedicated artists who were intent, like herself, in breaking barriers that allowed for greater creativity.

Accompanying Kerdpitak will be Lynn Todd and Jenny Hartley of New Zealand; both are sculptors and multi-disciplinary artists. Todd lived in the United Kingdom for over 9 years before returning to New Zealand.

“Who am I?” is the focus of Todd’s work. She seeks to explore how artists of diverse cultures project their identity and maintain their well-being in the midst of the challenges and complications present in the human condition and in their interrelationships between the individual, family, community, and the universal environment in which we all exist.

Hartley’s works follow the history of animal trade and the effects on environment in the historical connection of New Zealand with other countries.

Also accompanying Kerdpitak will be Pam Santi (Her fullname is Napapon Santirojprapai.), a Thai artist who settled in Memphis, Tennessee, whose work reflects her feelings and the influences of her former home on her present life.

The works of Ittirawee Chotirawee and Jade Chorkularb, Thai artists now living in the United Kingdom, and the work of South Korean artist Sejin Park will be shown in the exhibition.

Art critic Ron Schira noted of the 2013 exhibit, “The true draw and value of this exhibit is not the art per se, but the willing international cooperation of artists worldwide to make such an event as this actually work.”

Kerdpitak explains the mission: “The exhibition will project the artists’ experiences, artistic and cultural background—including the influences of social and political issues—of their countries of origin. In addition, we are eager to raise awareness and share our concerns regarding how we and our cultures and societies have been treated by other countries and how our individual identities have been formed as a result.”

“Although the exhibition will present artwork from artists outside the USA, it will reflect the evolution of society today, examining the history of people’s migration throughout the world, including the Amish in Pennsylvania and the rest of the United States,” she continued.

“For example,” she adds, “New Zealand’s culture is derived from Maoli and early British settlers (https://en.wikipedia.org/wiki/New_Zealand). Thailand and South Korea are mono-culture countries. Regarding economic growth, foreigners and investors from the West have migrated to live and work there and in other countries in those regions. On the other hand, there have been a number of Asian immigrants in the West such as in the UK and USA; and among these different cultures, we influence each other’s cultures. The exhibition will demonstrate how the artists’ are affected and influenced by these circumstances and reflect these influences through their artistic practices.”

In her artist talks Kerdpitak will project her focus in developing an “out-of-the-box,” “barrier-crossing” ethos, share the key influences and experiences during her art education in the UK that inspired her art initiatives and movement “Uncooked Culture,” outside the mainstream and in providing examples of a “sustainable artists’ community” globally. Her approach is designed to bring everyone together without labeling each artist with prescribed categories set by the art world’s hierarchy.  The talk will include pictorial documentation of the exhibitions and activities from previous and current traveling art initiatives.

Her talk will also raise debatable points based on her life as an artist and ordinary person and as an artist, who is/was an immigrant on a global level. She’ll share how she managed the influences inherent in the culture of the USA and the UK and explore how artists from the powerful side of the world are influenced by an immigrant who has lived on the opposite side of the world.

Todd will run a “Who Am I” workshop to encourage students to explore their inner identity and their “well-being in relationship to the human condition and the outside influences and the expectations of others.”

Hartley will facilitate “Tracing Animals,” a drawing, mixed media, and collaborative research workshop that will focus on the ways in which native animals are used in modern society and how they came to be in the countries that they are now.

Kerdpitak and Santi plan a demonstration and workshop using a combination of visual elements entitled “Art in Translation of Life” based on how artists express themselves and tell their stories, explore the human condition, and voice their views toward the world around them through their artwork.

Questions may include “Does Western artistic culture influence artists from other parts of the world who reside and create artwork in the Western environment?” “How does the artist survive the struggles they face in the Western world living as a person who often faces higher costs of living, social and cultural exclusion, greater competition for achievements, limited rights if they have not gained citizenship, and loneliness from being distanced from their family’s and friends’ support?”