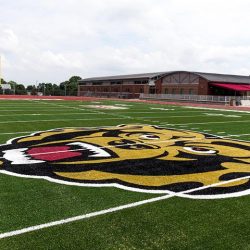 KUTZTOWN, Pa. – Kutztown University students returning to campus this fall will be welcomed by a plethora of summer athletic facility upgrades across campus.

NEW TURF AND TRACK: The turf at University Field at Andre Reed Stadium has been replaced to a new SprintTurf, while the track was also resurfaced as part of a summer-long project. The stadium is home to KU’s varsity football, field hockey and track & field programs, as well as serving the university’s club and intramural sports (Photo Gallery) (Time Lapse Construction Video).

LOCKER ROOMS: Locker room space in Keystone Hall for female teams has been newly renovated, along with the addition of one locker room.

COMPUTER LOUNGE: KU students and student-athletes now have a working space in Keystone Hall to spend time on their studies. A student computer lounge has been built in the southwest corner of Keystone Hall with desktop computers soon to be installed.

POOL UPGRADES: The pool in Keystone Hall was drained over the summer, re-grouted, and re-filled for an improved swimming environment for the KU swimming programs, as well as local and campus community groups that use Keystone Pool.

RESURFACED ARENA FLOOR: The floor in Keystone Arena was resurfaced, which serves as home for KU’s varsity volleyball, basketball and wrestling programs, as well as other KU student groups