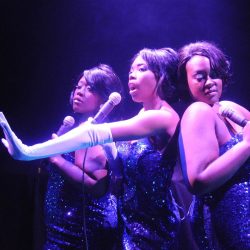 READING, PENNSYLVANIA – Genesius’ Hit Production Of “Dreamgirls” Is Back! If you couldn’t get tickets to the show at Genesius this is your chance to catch it under the sky in Downtown Reading! After a totally SOLD OUT RUN at Genesius Theatre this past August, Genesius is doing one performance of this hit musical which is FREE to the general public. That’s right, just bring a lawn chair and sit back, relax and enjoy this wonderful musical OUTDOORS!

Genesius Theatre presents the electrifying Motown inspired musical DREAMGIRLS for a FREE OUTDOOR PERFORMANCE in Downtown Reading on Sunday, September 17 at 2PM – in the Courtyard, behind the building at 6th and Penn – between Penn and Court Streets and 6th Street and the Railroad tracks (Courtyard is open at 1:15 PM). DREAMGIRLS is being presented in cooperation with D.I.D. the Downtown Improvement District, and the City of Reading. This is all made possible by a special grant from the Berks Arts Fund of Berks County Community Foundation!

The performance is also sponsored by SWEET STREET DESSERTS – SANDY SOLMON & DOUG MESSINGER, DAVE and MELANIE MATTES OF THE MATTES GROUP OF REMAX OF READING, UNITED ARTISTS SALON AND SPA is the hair and makeup sponsor, and THE SANTANDER PERFORMING ARTS CENTER AND ARENA. If there is inclement weather the show will be moved to the SPAC Ballrooms – The decision to move will be made by 10 AM the performance day. Check our Facebook Page or GenesiusDifference.org for that information.

DREAMGIRLS – This megawatt Broadway crowd-pleaser electrifies the stage with Motown tunes and powerhouse voices. Loosely based on, Diana Ross and the Supremes, the story follows the turbo-charged rise to fame of the Dreams. Dreamgirls celebrates the advent of R&B in the 1960s with a Motown-inspired score, dynamic performances, and a moving look behind-the-scenes of the entertainment business. Experience all the onstage-joy and backstage-drama as an up-and-coming girl-group learns hard lessons about love, trust, and what it takes to make your way to the top!

This modern-day classic sparkles with almost as many awards and accolades as its costumes have sequins. Take a trip back to the seminal music scene of the 1960s, when young women sang their way to musical prominence in a man’s world. Set in the Motown era that brought us powerhouse voices like Aretha Franklin, Diana Ross—and ultimately Destiny’s Child and Beyoncé— Dreamgirls explodes from the stage with legendary songs and timeless appeal.

Dreamgirls takes you on a journey through the evolution of American music and it’s influence by the African American culture. As a predominantly black cast with three female leads, Dreamgirls addresses the issues of sex and race. In an industry dominated by men, Effie, Lorrell and Deena quickly learn how to navigate through the music industry and become powerful black women.