Royals, the Next Generation 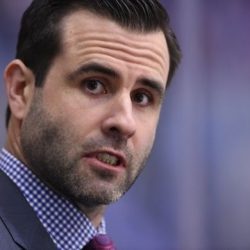 On August 29, the Royals rolled out their town hall with previews of coming events for the new hockey season.

The first part of things new revolve around the new people putting fannies into the seats. Jack Gulati has doubled down on being a hockey owner by bringing in some of the best executives he can find. No stranger to enlisting the best help available, as he has in his other enterprises, Jack has leveraged one of the best minds in hockey with the addition of Doug Yingst.

Doug has been a large part of the success that is Hershey Bears hockey for many years. Commitments to family and Lebanon Valley College have him only able to be a force on an advisory basis. But part time of Doug is probable better than full time of almost anyone else. He’s been coupled with Ray Melcher, a man whose business is analyzing business. A big part of what will lead to franchise success is recognizing early what is a failure and what is should be expanded. Ray has the acumen to do that. And with Doug to lean on for advice, good things should happen.

It’s encouraging to hear that management sees that a fan friendlier atmosphere is needed and that they want to take steps to get there. Some of the people they need to work through to get fans to a better place are the Parking Authority, SMG, the management of the arena, and the Berks County Convention Center Authority, owners of the building.

The second part of all things new revolve around getting fannies up and out of those seats with excitement. The team for this undertaking is new, regular season undefeated, head coach Kirk MacDonald and former Reading defenseman Pat Wellar. The last time these two were teamed up on Santander ice, Reading won the Kelly cup. I see a lot of pride and motivation in both of these men. Kirk also mentioned to me that they were a part of, perhaps, the worst team on Royal ice, the 2008-2009 Royals under Jason Nobili and fledgling coach Larry Courville. They know the bar has been set, however. The Royal have been in the postseason for the past eight years, and fans expectations don’t decline, they ramp up.

Kirk spoke about the style of hockey he hopes to play. Up tempo, in their face, push the puck up the ice hockey. As he put it, “If you have the puck all the time, you don’t need to be on defense.”

More than just wanting to be a good coach, both men show that they want to be good HERE. As Kirk put it when talking about winning in Reading, “To win your last game like that and go out like that, it’s awesome…. We take a lot of pride in winning a championship here and we want to continue the success of having them.”

I have tremendous respect for Kirk. He came out of RPI as a well touted young player, after having beaten cancer while at RPI. He moved through years toiling in the AHL and the ECHL. Not all of it was on good teams. But Kirk persevered through it all. One of the most telling and impressive moments about Kirk was his choosing to return from the AHL Houston Aeros to be a part of the championship season in our house. One has to be impressed by his knowledge of the game, work ethic, resiliency, leadership skills and commitment to the team.

So Doug and Ray will get fans into their seats and Kirk and Pat will see to it that they don’t use them too much.