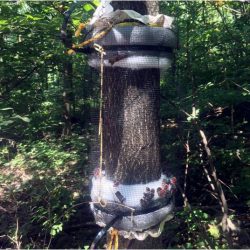 As the result of a mild winter, the Spotted Lanternfly (Lycorma delicatula) population is enormous this year. In many areas in early August, trees were completely covered with feeding nymphs. Unsurprisingly, reports of Spotted Lanternfly from locations previously considered uninfested are significantly on the rise in southeast Pennsylvania.

There is limited information on pesticide options for control of Spotted Lanternfly because is it a new pest to this area. This year, Penn State Extension is conducting efficiacy trials on products that are available to the homeowner for control on their property. Early this month, we began testing contact insecticides including horticultural oil, neem oil, insecticidal soap, and products that contained spinosad, carbaryl, bifenthrin, or pyrethrin as the active ingredient. Additionally, we included two systemic insecticides (both applied as soil drenches and one as a bark spray) in our preliminary trials.

Our initial observations suggest that some active ingredients produce better control than others. For those products with active ingredients of bifenthrin, pyrethrin, and carbaryl (from what was tested so far), we saw an immediate effect on caged lanternflies. There was some effect from neem oil and insecticidal soap, but results were variable. Also, the insects were not killed immediately with these products; it took several days to see the full effect. For the systemic products, the bark spray (active ingredient = dinotefuran) appears to outperform the drenches (dinotefuran and imidacloprid). We speculate that the drenches may do better if applied to the soil earlier in the season and may consider changing our study design for next year. Regardless, our 2017 study is a preliminary effort. Moreover, we have not completed collecting our data for the season.

Adult Spotted Lanternflies started emerging in early August. The female lanternflies are not reproductively mature at emergence. It is believed that they must feed on the Tree-of-Heaven (Ailanthus altissima) at some point in order to complete the life cycle. However, it is important to understand that the number of hosts on which the insect can complete its life cycle is unknown at this time. Other researchers are involved with determining primary and secondary host plants from opportunistic/accidental feeding. However, Penn State Extension is also monitoring the population for general reproductive status in order to adjust control tactics (if appropriate) to target pesticide applications prior to the onset of oviposition in the majority of the population in order to make additional control suggestions that may reduce the population of the following year.

Always use pesticides carefully. Read the label to ensure your safety as well as that of the environment.