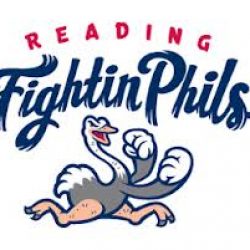 Players were recognized for their efforts during the season

(Reading, PA) – The Reading Fightin Phils announced their annual end-of-season player awards prior to last Thursday night’s game against the New Hampshire Fisher Cats. Below is a listing of the awards and the recipients for the 2017 season.

Reading center fielder Carlos Tocci was one of the best all-around players in the Eastern League this season, typically batting third in manager Greg Legg’s lineup while playing gold glove defense. At 21 years old, Tocci was on the younger side yet still managed to shine in his first season at Double-A. At the time of his call-up to Triple-A Lehigh Valley in mid-August, Tocci was ranked second in the Eastern League with 132 hits and a .307 average while leading all players with seven triples. Following a Midseason All-Star selection, Tocci was also named the Phillies Minor League Defender of the Month in June. Statistically speaking, July was his best month of the season, when he batted .323 and added 16 runs batted in over 27 games. Other milestones during the month included his first two Fightin Phils home runs, which came in consecutive games on July 2 and 3 against the Flying Squirrels. Tocci later had his first 4-hit game of the season on July 16 against Binghamton, then followed it with his first 4-RBI game in New Hampshire the following day. A week later, Tocci made personal history when he drove in five runs for the first time in his career against the SeaWolves at FirstEnergy Stadium. Overall, he shined at home, batting .327 compared to .287 on the road. Tocci was ranked as the Phillies #29 prospect by Baseball America this year, and without question elevated that number for the 2018 season.

The highest-rated prospect on the Opening Day roster, Drew Anderson blossomed into a frontline ace for the Fightin Phils. It didn’t happen right away, as Anderson opened the season with three no decisions before winning three consecutive starts from the end of April into early May. Facing a really tough Bowie lineup on May 8, Anderson delivered his best start with a career-high 10 strikeouts over seven innings in a 2-1 Fightin Phils win. In his next start, he went seven innings again and struck out seven Portland Sea Dogs, bringing home his first of two Pitcher of the Week Awards. Ranked amongst the Eastern League leaders in opponents average and WHIP, Anderson put the Fightin Phils in a position to win almost every time he stepped on the mound. The highlight of his season came on August 1, when he made his Major League debut in Anaheim and struck out Mike Trout in his first inning for Philadelphia.

Building off his introduction to Double-A halfway through 2016, Viza was the Fightin Phils most important pitcher towards the end of this season. Needing arms and innings, manager Greg Legg and pitching coach Steve Schrenk could always count on the 22-year-old righthander to take some pressure off the bullpen. Leading the Fightin Phils in both starts and innings, Viza also led the staff in strikeouts while approaching around 140 innings for the third consecutive season. From June 17-29, he won three straight which culminated in his finest start for the Fightin Phils with eight strikeouts over eight innings in Harrisburg. Two starts later, he struck out a season-high nine hitters in just five innings against the Rumble Ponies, then made three straight starts in which he logged seven innings.

Just one season after Dylan Cozens won this award for slamming a franchise record 38 home runs, third baseman Mitch Walding was more than a deserving winner in 2017. He had high expectations after being named a consensus All-Star and an Organization All-Star with Clearwater last season, and delivered on those in June. Walding batted .337 (31-for-92) with four doubles, two triples, 13 home runs, 27 RBIs, 21 runs scored, a .398 on-base percentage, and a .848 slugging percentage in 25 games during the month. He led all Eastern League players in home runs (13), RBIs (27), runs scored (21), total bases (78), slugging percentage (.848), and OPS (1.246) during the month of June and tied for the league lead in extra-base hits (19). The Phillies selected him as the Minor League Hitter of the Month after he had the most home runs among all minor league players in June, and was tied with the Dodgers’ Cody Bellinger for the most in affiliated baseball. There were four games in June when Walding hit two home runs.

Similar to Team MVP Carlos Tocci, Jiandido Tromp flew under the radar coming into the season and put together his most complete performance during his time with the Phillies organization. It started before the season began during the annual 222 Showcase against the IronPigs, when he cranked a double off the wall against Mark Appel. He never really slowed up after that, setting the tone with a six-game hitting streak to start the season. His most impressive feat came in late June when he homered in three straight games against the defending champion Akron RubberDucks. A few days later, Jiandido was named Eastern League Player of the Week for the second weekly honor of his career. Aside from a Midseason All-Star selection to add to the resume, Tromp received his first Triple-A call-up in early June and appeared in three games with the IronPigs, driving in two runs during his time there.

Always charismatic and colorful, Angelo Mora was fun to watch during his stints with the Fightin Phils in 2017. With the ability to play multiple infield positions and being a switch-hitter, he was the Swiss Army Knife of this team. This award falls in line with Angelo’s 2016 Larry Rojas Award, which honors love and respect for the game of baseball, an outstanding work ethic, and pride in being a member of the Phillies organization.

It’s almost fitting that at one time Zach Coppola was a Jackrabbit at South Dakota State University. When the Phillies drafted him in the 13th round in 2015, the center fielder was known for his speed and hitting acumen. Those were on display in Baseballtown after he was called up from Clearwater in early June, and he eventually ran away as the Fightin Phils stolen base leader atop the lineup. At one point, Coppola reached base in 23 straight games from July 9-August 5 and he was the only Fightin to steal three bases in one game when he accomplished the feat on June 14 in Bowie. He will finish the 2017 season as the organization’s stolen bases leader.

On top of their careers of professional baseball players, the Fightin Phils lend a hand in the Berks County community as part of the Philadelphia Phillies Community Service initiative. This season, first baseman Kyle Martin has the honor of taking home the Eugene L. Shirk Community Service Award after helping with baseball camps, hospital visits, and other community appearances. Martin has been an active participant in all the on-field Q & A sessions prior to the Fightin Phils camp day games this season.

America’s Classic Ballpark is proud to be a part of Pennsylvania’s Americana Region. Fightin Phils Tickets are available online at Fightins.com, by phone at 610-370-BALL, and in-person at FirstEnergy Stadium. Follow the Fightin Phils on Twitter at @ReadingFightins and like them on Facebook via www.facebook.com/fightins.