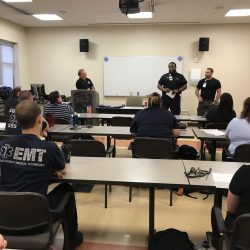 READING, PA – It’s been 50 years since James A. Gilmartin relocated to Hamburg, Berks County, from his hometown of Pittston, Luzerne County.

He arrived in Berks to become assistant principal at what was then Hamburg Area Junior-Senior High School and he went on to serve from 1978 to 1992 as superintendent of the Hamburg Area School District. After retiring, he served as acting superintendent and substitute principal for many school districts in the region while they searched for permanent replacements.

“During those 50 years, the people of Hamburg and its environs always treated me with respect and it was my idea to give something back in appreciation,” Gilmartin said.

Aitken guided Gilmartin through the process of evaluating his interests and passions. Gilmartin wanted to create scholarships as a way to thank those who work in public safety, just as his father, Joseph, did as a police patrolman in the City of Pittston for more than 30 years until his death in 1950.

Michael Leifer, President and CEO of The Peanut Bar Restaurant in Reading, was present for the conversation between Aitken and Gilmartin and he mentioned an ongoing need for more paramedics and emergency medical personnel.

With his own past service as an ambulance attendant and as a volunteer firefighter, Gilmartin decided to establish the James A. Gilmartin Paramedic Scholarship Fund of Berks County Community Foundation.

The fund will annually award $5,000 in scholarships at various stages of the academic year for residents of Berks County who are enrolled in the Reading Hospital School of Health Sciences Paramedic Program. Recipients must have been an Emergency Medical Technician (EMT) or volunteered as an EMT for at least one year before entering the Paramedic Program.

One scholarship of $2,500 will be awarded to an incoming student to the Paramedic Program who has financial need and who demonstrates the ability to succeed in the program based on admission exam results and passion for the vocation. Applications will be available on bccf.academicworks.com between May 1 and June 1.

February will mark Gilmartin’s 60th anniversary as a volunteer firefighter for the Niagara Engine Company No. 2 in Pittston, where he also served as Assistant Fire Chief in 1961.

“I had Friday night duty as well as weekend duty several times a year,” Gilmartin recalled.