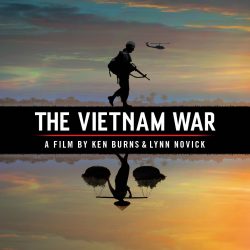 The Wyomissing Public Library has been selected by the American Library Association (ALA) and WETA Washington, DC, to receive a programming kit for “The Vietnam War,” a 10-part documentary film by Ken Burns and Lynn Novick that will air on PBS stations beginning Sept. 17.

In “The Vietnam War,” filmmakers Burns and Novick tell the epic story of the conflict as it has never before been told on film. The film features testimony from nearly 80 witnesses, including many Americans who fought in the war and others who opposed it, as well as Vietnamese combatants and civilians from both the winning and losing sides. Learn more about the film.

Wyomissing Public Library was one of 50 U.S. public libraries selected to receive the kit through a peer-reviewed competitive application process. More than 350 libraries applied, according to ALA. View the list of selected libraries.

Wyomissing Public Library will receive a copy of the 18-hour documentary series on DVD, with public performance rights; the companion book, “The Vietnam War: An Intimate History” by Geoffrey C. Ward and Ken Burns (Alfred A. Knopf, a division of Penguin Random House, 2017); a programming guide, promotional resources, partnership opportunities and more.

The kit is designed to help libraries participate in a national conversation about one of the most consequential, divisive and controversial events in American history.

The project is offered by the ALA Public Programs Office in partnership with WETA Washington, DC.

Jill Mahon, Adult Program Coordinator, indicated that The Vietnam War film by Ken Burns and Lynn Novick is “a great addition to our ongoing adult programs.”  Colleen Stamm, Library Director, said she is “thrilled to have our efforts recognized by the American Library Association and WETA. We are excited about offering this series to the Berks County community.”

In addition to the PBS series, the library will offer several films made about the war, starting with Oliver Stone’s 1986 film, “Platoon.” It will be shown on Monday, October 9th at the library, at no cost to the public.

For information about the series or the film, or about the library in general, visit www.wyopublib.org.