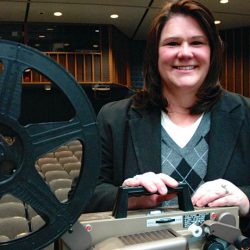 The Organization for the Study of Communication, Language, and Gender (OSCLG) has presented its 2017 Feminist Teacher-Mentor Award to Dr. E Michele Ramsey, associate professor of Communication Arts & Sciences and Women’s Studies at Penn State Berks. Ramsey will be honored at the OSCLG’s 40th Annual Conference at Omaha, Nebraska from October 5 through 8, 2017.

OSCLG, which started as a series of interdisciplinary conferences that began at Bowling Green State University in 1978, each year selects one exemplary feminist teacher-mentor who has inspired students and colleagues by modeling feminist ideals of caring, community power-sharing and commitment while also earning individual and collaborative records of achievement.

Competition for the Feminist Teacher-Mentor Award is intense. Nominations are encouraged among academic ranks and the award process involves two stages. At the first stage, the potential winner is nominated by letter by students and colleagues; the second stage involves additional support and a statement from the nominee.

Ramsey, who was supported by more than a dozen recommendations from students, fellow faculty members and other colleagues, considers teaching and mentoring the most important element of her job.

She credited her own former faculty for showing her how important undergraduate teaching and mentoring can be. “I was fortunate to have faculty members in my undergraduate career who truly cared about my education and my future at a time when I wasn’t sure what I wanted to do with my life,” Ramsey noted.

She added, “That excellence in teaching and mentorship continued throughout graduate school and I knew that while I would always enjoy doing research as a faculty member, my heart was in undergraduate education and the opportunity to give my students the support my faculty members gave me during those very formative years of my life.”

Ramsey also counts many of the faculty she works with at Penn State Berks as excellent role models for ethics and the practice of teaching and mentoring.