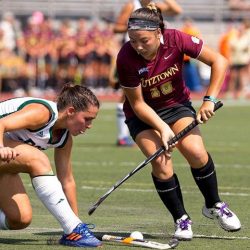 KUTZTOWN, Pa. – After a three-goal week, sophomore forward Kyra Wozniak earned Pennsylvania State Athletic Conference (PSAC) Athlete of the Week honors as voted on by the league office on Sept. 26. It is the first weekly honor of her career.

Wozniak had her hand in three of the five goals scored in the fifth-ranked Kutztown University field hockey team’s two victories last week.

Her tally against West Chester on Wednesday, Sept. 20 proved to be the game-winner in a 2-1 win over the third-ranked Golden Rams.

Wozniak followed that up with a two-goal game against Seton Hill University over the weekend. She recorded the first two goals in a 3-0 win over the Griffins to cap a 2-0 week for KU.

Wozniak is tied for third in the PSAC in goals (7) and tied for fourth in total points (14). She has recorded 10 career goals during the first two years of her career.

Kutztown hits the road for two conference games this week beginning with a trip to Bloomsburg on Wednesday, Sept. 27 at 4 p.m.