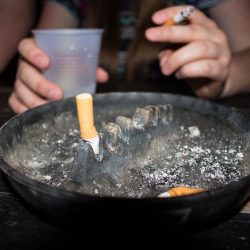 HARRISBURG, Pa. – More than two-thirds of Pennsylvania voters favor passing a law that would prohibit smoking inside all workplaces in the state, according to a new poll from Breathe Free Pennsylvania.In the survey, 69 percent of voters said they support legislation to close loopholes in the state’s Clean Indoor Air Act. According to Diane Phillips, government relations director for the American Cancer Society’s Cancer Action Network in Pennsylvania, employees in some bars and restaurants, casinos and private clubs still cope with secondhand smoke containing 70 chemicals associated with cancer.”It’s definitely a health factor,” she said, “and there’s no reason in 2017 that a worker should be having to face this in the workplace.”House Bill 1309 and Senate Bill 519, already introduced in the General Assembly, would close those loopholes in the current law.Phillips said support for the legislation cuts across party lines, with almost two out of three Republicans in favor. Similar numbers would like to see the ban extended beyond tobacco products.”Sixty-four percent of voters favor including e-cigarettes in the smoke-free law,” she said, “and even 37 percent of smokers favored a smoke-free law.”The Clean Indoor Act was passed in 2008, before e-cigarettes were widely available.A 2013 study of risks from secondhand smoke in restaurants and bars where smoking was allowed found that the lifetime excess risk for servers was 802 per million for lung cancer death. Phillips pointed out that it affects asthma and heart disease as well.”Here’s what we do know, and the surgeon general has said this,” she said. “There is no safe level of exposure to secondhand smoke, and I think that’s the most important issue.”The Breathe Free Pennsylvania poll is online at newscenter.lbl.gov, the text of HB 1309 is here, and the text of SB 519 is here.