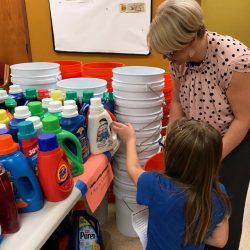 In light of the devastation caused by Hurricanes Harvey, Irma & Maria – West Lawn UMC, partnered with Northstar UMC in Exeter Township & Christ UMC of Birdsboro, along with several local businesses, to collect items for 130 Flood Buckets to be sent to UMCOR (United Methodist Committee on Relief).

Flood buckets included items such as cleaning & sanitation supplies along with essentials needed to clean up from the flooding & wreckage left from these storms.

After the Buckets were assembled by volunteers from West Lawn & Northstar UMCs, the Wilson High School football team assisted in moving these buckets into the moving van for transportation to UMCOR’s Mission Central in Mechanicsburg, Pa.  Buckets will eventually be distributed by the various UMCOR teams on the ground in Texas, Florida & Puerto Rico.

In addition to the Flood Bucket collection, nearly $35,000 has been donated to UMCOR to date to aid in relief efforts!  One of the pillars of our mission at West Lawn UMC is Joyful Generosity – when we see a need, we respond cheerfully!  We appreciate all in the West Lawn Community that have rallied behind this cause and given of their time & resources!