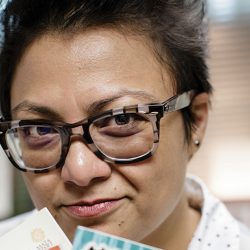 Dr. Cheryl L. Nicholas, Associate Professor of Communication Arts and Sciences (CAS) and Global Studies at Penn State Berks, will receive one of only two Teachers on Teaching honors being presented at the National Communication Association (NCA) 103rd annual “Our Legacy, Our Relevance” convention at Dallas, Texas from Nov. 16–19, 2017.

The NCA Teachers on Teaching Series celebrates exemplary teachers of communication at all academic levels. A highlight at the annual convention, each session in the series features two or four notable teachers who share their stories of classroom successes, challenges and “teachable moments.”

A member of the Penn State Berks faculty since 2007, Nicholas is being recognized for her teaching philosophy, which is strongly grounded in the concept of critical consciousness, an approach to education developed by Brazilian scholar, Paulo Freire.

“Critical consciousness involves teaching students to grapple with social, political and economic oppression,” explains Nicholas. “I am interested in how everyday communicative activities become sites of contestation, where people negotiate their identities and worldviews, particularly those identities and worldviews impacted by oppressive forces. My scholarship, teaching and service work towards cultural awareness and social justice.”

Nicholas was nominated for the award by fellow CAS faculty member Dr. E. Michele Ramsey and two former students, Dr. Savannah Ganster, an assistant professor at Kutztown University, and Dr. Diana Trebing, an associate professor at Saginaw State University. All three, along with Penn State Berks alumnus Chris Brendel, one of Nicholas’ former students who is enrolled in a graduate program at the University of California Santa Barbara, will be part of a panel at the NCA convention to address Nicholas’ accomplishments.

Nicholas, who earned a Ph.D. in Communication from the University of Oklahoma, is an ethnographer who enjoys doing research in her homeland, Malaysia. Her research is based on how symbolic activity constitutes and is constituted by cultural worldviews. Theoretically, her work is grounded in language, social interaction and critical perspectives.

She is also interested in postcolonial and queer theory. Her research has been published in journals such as Sexuality and Culture, Communication Quarterly, Qualitative Research Reports in Communication, Storytelling, Self & Society and the Journal of International and Intercultural Communication and as chapters in books such as Queer Identities/Political Realities; Games, Leadership and Learning in Virtual Environments; and Critical Articulations of Race, Gender and Sexual Orientation.

She is the recipient of the 2014-15 Penn State University Commission on Lesbian, Gay, Bisexual, and Transgender Equity (CLGBTE) Award for Outstanding Service and the Penn State Berks 2011 Outstanding Full-Time Teacher Award.