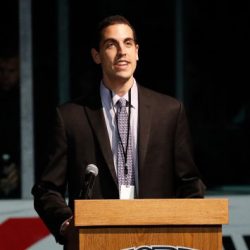 The Reading Royals have announced that the organization has hired David Fine as the team’s broadcaster and director of media relations. Fine, who will join the team in the immediate future, comes to Reading from the Tri-City Storm of the United States Hockey League, where he served in a similar capacity for the past two seasons. Prior to that, Fine spent four seasons on the broadcast crew for the Syracuse Crunch of the American Hockey League.

Fine’s responsibilities will include handling the play-by-play duties for all Royals’ regular season and playoff games, which are broadcasted on the iHeartRadio streaming audio service, which is available on all digital devices at “Rumba 1340” in Reading. In addition, all Royals’ road games will continue to be telecasted locally in Berks County, on BCTV with Fine providing the play-by-play action. Fans attending Royals’ games at Santander Arena will also be able to listen to the game night broadcast on the Deibler Dental In-Arena Broadcast at 99.3 fm inside the Arena. Fine will be joined in the game night broadcast booth for home games by Color Commentator Pat Richards, who will be entering his fifteenth season with the team.

Fine will also serve as the host for Royals Radio Recon, the team’s weekly coach’s show, which is held every Tuesday night from 6 – 7 pm at Jimmy G’s Railroad House Sports Bar and Restaurant (152 Woodrow Ave., Sinking Spring, PA; 610-678-1177). The first show for Radio Recon, which can also be heard on the iHeartRadio streaming audio service, will be held on Tuesday, October 10. It is anticipated that Pat Richards, along with long-time Royals’ executive Mark Wallace, will host the show that night. Upon joining the team, Fine will also be responsible for developing media outreach strategies, while continuing to strengthen relationships with media in the Reading and Berks County communities.

“The Royals are eagerly anticipating David’s arrival in Reading,” said Ray Melcher, the Chief Operating Office and General Manager of the Royals. “He has done a wonderful job in the USHL over the past two seasons, and we’re confident that he will bring his strong broadcasting skill set, as well as his genuine enthusiasm and energy to the Royals’ broadcasts this season.”

“I want to thank Mr. Melcher, Mr. Gulati and the Royals’ organization for this fantastic opportunity,” Fine said. “I’m excited to carry on the great broadcasting tradition here in Reading and cannot wait to get started.”

In two years with Tri-City, Fine, 24, handled the duties in the broadcast booth for the team’s only run to the Clark Cup Championship in 2016. He was selected to work the USHL/NHL Top Prospects Game as a broadcaster twice by the league. Prior to his time with the Storm, Fine broadcasted minor league baseball in 2015 with the Lansing Lugnuts. A 2015 graduate of the S.I. Newhouse School of Public Communications at Syracuse University, Fine spent four years (2011-15) with the Syracuse Crunch of the American Hockey League as assistant director of broadcasting and also was a part of the broadcast team for Syracuse University football, basketball and lacrosse at WAER 88.3 FM in Syracuse. He is a native of Bloomfield, New Jersey.