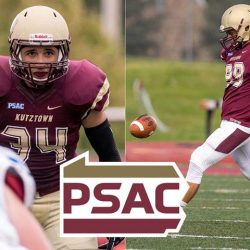 Both Golden Bears are in their first season on the field as redshirt-freshmen, and earn their first career Athlete of the Week honors.

Turber-Ortiz had two interceptions Saturday, including his biggest of the year late in the game to seal Kutztown’s 23-7 win at Bloomsburg. With Bloomsburg driving deep in Kutztown territory in a 3-point game, Turber-Ortiz picked off the Bloomsburg quarterback near the goal-line and returned it 50 yards to setup an ensuing KU touchdown to seal the win.

Turber-Ortiz ranks second in the PSAC and third in Division II with five picks this year, one shy of setting the school’s freshman record. He rates fourth on the team with 36 tackles, including 1.5 for a loss.

Krcic was able to help Kutztown control field possession in its win at Bloomsburg. He averaged 45.6 yards on five punts, including two 50-yarders and one inside the 5-yardline.

He leads the PSAC and ranks fifth in Division II with an average of 45.1 yards-per-punt. Notably, the school-record for a season is 43.02 by KU All-Time Team punter Jon Corson in 2003. Krcic also leads the PSAC with 11 50+ yard punts.