Local School Collects Over 1,000 Pairs of Shoes For Charity 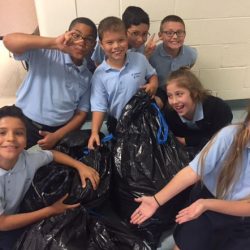 Every year, the students and faculty of St. Catharine of Siena School in Reading, Pennsylvania hold an annual Walk-A-Thon for Catholic Education, an important fundraiser that helps to fund necessary safety, curriculum, and technology updates. But this year, the school says it has taken “a giant step forward” by also running a shoe drive for non-profit organization, Soles4Souls, in connection with the annual Walk-A-Thon.

Amy Impellizzeri, Advancement Director of St. Catharine of Siena School, explains how the collection for Soles4Souls started: “We are so very grateful to the entire community, for generously supporting our Annual Walk-A-Thon. So, this year, we realized we really need to pay that generosity forward.

“To pay it forward, the children, faculty, and staff of St. Catharine of Siena School have been collecting gently used shoes for a group called Soles4Souls. Soles4Souls is an American-based charity that donates shoes to areas in need, even helping some people in poor areas around the world set up businesses in which they repurpose and re-sell shoes for job opportunities.”

Since it began in 2006, Soles4Souls has distributed more than 30 million pairs of shoes in 127 countries around the globe, including taking an active role in supporting the areas devastated by the recent hurricanes.

At a pep rally to kick off the shoe drive on September 15, the school children originally set a goal to collect 500 pairs of shoes, but quickly surpassed that goal by 100%!

Impellizzeri says the children have all pitched in to collect the shoes, sort and assemble them for delivery to Soles4Souls’ closest Pennsylvania drop-off point in Doylestown, Pennsylvania.