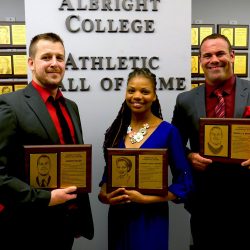 Two conference champions, an All-American football player, and a talented two-sport performer comprise the Hall of Fame Class of 2017. Albright College enshrined Russell Benditt, Lakeisha Fairley, Andrew Ikeler, and Jack Sudol into its Athletic Hall of Fame during a special reception and dinner in the Schumo Center on the evening of Friday, October 6.

The 2017 Hall of Fame class joins more than 100 Lions from 150-plus years of athletics competition who have excelled in their sports while at Albright College.

Russell Benditt ’02 was a member of the Albright football team. He earned First Team All-America honors in 2001 and Third Team honors in 2000, while being named MAC Defensive Player of the Year in 2001 and MAC Defensive Lineman of the Year in 2000. He was a three-time First Team All-MAC selection in addition to holding the school record in career sacks and tackles for loss.

Following his graduation from Albright he earned his Master’s Degree in Educational Leadership from Cabrini, and has served as a high school football, basketball, and cross country coach.

Fairley holds the MAC 400 meter record, and graduated with five school individual and relay records. She was a three-time ECAC qualifier in addition to being a MAC Academic Honor Roll member. Fairley was also awarded the Memorial Prize of the Class of 1926 in 2005. She went on to become a Kindergarten teacher and English as a Second Language teacher.

Andrew Ikeler ’05 made his mark on Albright athletics as a member of the men’s swimming team. Ikeler won seven MAC individual and relay championships, while being named most outstanding swimmer at the MAC Championships twice.

Ikeler was a key component in the Lions three-straight MAC Championship teams, and previously held the MAC record for the 400 Individual Medley. He graduated with four school records in addition to being a member of the CoSIDA Academic All-District and All-MAC Academic Teams. Ikeler earned his Master’s Degree in Education at West Chester following his graduation from Albright, and served as the swimming head coach at Penncrest High School.

John Sudol ’54 was a member of the Albright football and baseball teams. Sudol ranks second all-time at Albright in interceptions, while holding the record for most interceptions in single season and single game.

Sudol earned the Lanshe trophy twice during his Albright football career, and owns the school record for longest punt return. Following his time at Albright, Sudol earned his Medical Degree from Hanhnemann Medical College, and Spent 36 years as OB/GYN at Mountainside Hospital in Montclair, N.J.