Alvernia Inducts Five into Hall of Fame Class of ’17 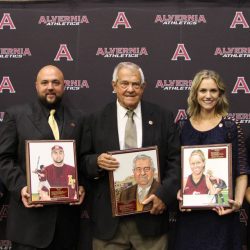 Reading, Pa. (Oct. 13, 2017) – Alvernia University inducted five members into the Athletics Hall of Fame as the Class of 2017 on Friday, Oct. 13 in a ceremony held in the Physical Education Center.

Alcott was a four-year starter on the baseball team at 1b, C, RF, and DH.  He was a three-time member of the All-PAC First Team. His teams put up a combined record of 113-53-1 overall and 62-22 in the Pennsylvania Athletic Conference.  As a freshman, he was a member of the team that traveled to Gettysburg to claim an ECAC Title with wins over Pitt-Bradford and the host Bullets.

Alcott is listed in some of the craziest box scores the Alvernia baseball team has ever produced.  As a sophomore, he was batting clean up when Todd Meyer selfishly took all the RBIs for himself hitting for the home run cycle in a 36-15 win over Wilmington.  As part of a run to the Regional Final in ’02, Alvernia twice posted 8-run innings in comeback wins over DeSales and Alcott was right in the middle of both of them.  He batted fifth and caught the full nine innings when Alvernia claimed the ’03 PAC Title with a 19-18 win over Gwynedd-Mercy at Frawley Stadium in Wilmington.

Alcott is in the top 10 in almost every category in the record book.  Top 10s in games played, games started, runs score, doubles, home runs, RBIs, total bases, slugging, walks, hit by pitch, and on base percentage.  He is third all-time in home runs with 38 and fourth in RBIs with 172.

Alcott graduated with a degree in education but first decided to pursue a professional playing career.  He had tryouts with the Marlins, Braves, and Padres, and ended up playing three seasons for teams in the Golden League, the Frontier League, and the Canadian-American League.  After his playing career, he accepted a position at the Glen Mills School as a counselor.  He is now a senior counselor with the school and also the head baseball coach.

Dr. Flannery was the first full-time Athletic Director at Alvernia and also served as the Dean of Students.  Under his direction the sport sponsorship grew from five teams to 12 and the number of student athletes more than doubled from 53 to 117.  He hosted the first basketball camp on campus that included the 1985 National Champions from Villanova.

Flannery is a graduate of Central Catholic High School and has attended Kutztown, Temple, Oklahoma State, and the University of Florida.  He was inducted into the Berks County Chapter of the Pennsylvania Sports Hall of Fame in 1982 and has been the president of the chapter for 25 years.

Flannery was the principal at Reading High for 13 years and the Executive Director of the Berks County Interscholastic Athletic Association for 17 years.  He also served in the United States Navy during the Korean Conflict with a rank of Petty Officer 1st Class.

Megan Novogratz and Becky Macchione were the cornerstones of the team that built the great tradition of field hockey that we have today.  Alvernia was on a 10-year playoff drought when they showed up, and they helped change that immediately with a PAC Quarterfinal appearance in 2003 then Finals appearances in both the PAC and ECAC in 2004.  Then, in 2005, the first PAC Title—a 4-3 Overtime win at home over Eastern.  Twelve seconds into overtime it was Novogratz assisting Jessie Titus for the game-winner.  With that came the first NCAA appearance for Alvernia Field Hockey where the team advanced to the second round with a 2-1 win at Lynchburg.

In 2006, the seniors led Alvernia to another PAC Finals appearance and an at-large bid into the NCAAs.  A sign of the respect that comes with sustained excellence.  In four years the team posted a record of 68 wins and 22 losses and went 36-8 in conference games.

Megan Novogratz was named PAC Player of the Year in 2006.  She was the third of four straight winners for Alvernia.

Novogratz was a 3-time All-PAC First Teamer, and 3-time NFHCA All-Region.  In 2006 she was named Third Team All-American by womensfieldhockey.com.    She also earned the NFHCA’s Individual Academic Award three times for meeting their minimum standard 3.3 GPA.

Novogratz is third in career goals at Alvernia with 76, second in assists with 33, and third in points with 185.

After graduation in 2007, Megan took a job teaching 5th and 6th grade in the Owen J. Roberts School District.  She earned her Masters in Education from Arcadia.

Macchione remains the career leader in goals scored at Alvernia with 93, and ranks 14th All-Time in Division III.

Macchione is currently third in career assists at Alvernia with 30 and second in points with 216.

After graduation, Becky accepted a position in the Wilson School District teaching 4th, 5th, and 6th grade math.  Following three years there she took a job as a Reading teacher at Conrad Weiser West Elementary School.

Jason Zeigler remains the career leader in wins at Alvernia with 32.  He was the model of consistency chalking up eight wins in each of his four years.  He is also one of five pitchers to have two shutouts in a year and one of three pitchers with three in his career.  He is third in games started with 41, fourth in complete games with 11, second in innings pitched with 265, and third in strikeouts with 258.

Zeigler was named PAC Rookie of the Year in 2004.  He was named Second Team All-PAC Pitcher twice and First Team pitcher once.  He was also named First Team Designated Hitter in 2006.

Zeigler earned a complete game victory in a 6-5 win over perennial power TCNJ at Bear Stadium in Boyertown in the opening round of the 2005 Mid-Atlantic Regional.  After allowing five runs through six innings, he shut down the Lions over the final three innings stranding the potential tying run at third base in the ninth.  His eighth win of 2006 was another sweet victory as Alvernia opened the PAC Championships with a 14-7 win over arch nemesis Gwynedd-Mercy.

Immediately following his graduation from Alvernia in December of ’07, Zeigler accepted a position teaching Mathematics at Reading High.  In 2016 he was promoted to Department Chair and assigned the role of Summer School Coordinator.  He has also been an adjunct professor at Alvernia.

Zeigler still stays connected to baseball as a coach.  He started his coaching career in the New York Collegiate Baseball League with the Hornell Dodgers.  In 2008 he returned to Governor Mifflin as an assistant coach.  In 2009 and 10 he was an assistant at Reading High and in 2011 was an assistant back here at Alvernia.  For the last six years he has been the head coach of the varsity team at Reading.  The Knights won the 2014 Berks County Championship with an 18-6 overall record and were ranked #1 in District 3 Quad A.  That year Zeigler was named Coach of the Year