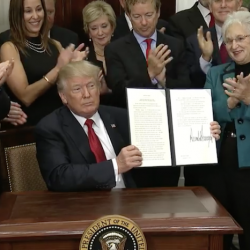 HARRISBURG, Pa. — Fiscal analysts say President Donald Trump’s actions to undermine the Affordable Care Act put health insurance at risk for 400,000 Pennsylvanians. First, the President ordered federal agencies to allow insurance policies that don’t meet ACA requirements for covering essential care. Then, he ordered a halt to premium cost-sharing payments for people earning less that 250 percent of the federal poverty level. Marc Stier, director of the Pennsylvania Budget and Policy Center, said those actions will lead to premium price hikes of more than 20 percent for many Pennsylvanians who buy their insurance through the marketplace.”If premiums rise, then even fewer people will be able to afford insurance, and it could lead to what they call a ‘death spiral’ in the individual marketplace,” Stier said, “which means that a large portion of those 400,000 people will be out of luck.”President Trump has claimed that his actions will give millions of Americans more access to affordable health insurance. But most analysts say premiums will rise dramatically and policies will cover less.Some 227,000 Pennsylvanians receive subsidies to help pay their insurance premiums. Stier said he believes they are likely to lose their insurance altogether if the President’s action isn’t reversed.”Congress could reverse it. They could pass a law that establishes, without any legal question, those cost-sharing payments as part of the ACA,” he said. “But President Trump would have to sign it.”He added there are other actions Congress could take to make the insurance marketplaces more efficient and premiums more affordable, but it would take strong, bipartisan cooperation.On Friday, 18 states, including Pennsylvania, signed on to a lawsuit to stop the President from ending the subsidies. And Stier said insurance companies might sue as well.”Those payments go to the insurance companies to compensate them for cost reductions they pass on to consumers,” he said. “The law still obligates them to pass those cost reductions on to consumers, but they just won’t get compensation.”The Congressional Budget Office estimates that canceling the subsidies would increase the federal deficit by $194 billion over the next ten years.More information is available here.