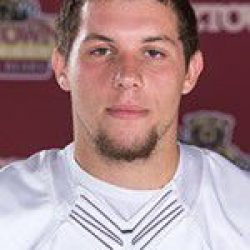 DiGalbo threw for a career-high 351 yards in a 41-9 victory over East Stroudsburg University on Saturday at Andre Reed Stadium, and he added four touchdowns through the air. The 351 yards through the air topped his previous career-high of 301 yards in Kutztown’s (5-2 overall, 3-1 PSAC East) win over Seton Hill back on Sept. 16. He is the first Golden Bear to throw for more than 300 yards in a game twice in a season since Chad Barton in 2015.

In the win over the Warriors Saturday, DiGalbo tossed a season-long 79-yard touchdown pass and connected with 11 different receivers, which is the most by a quarterback since Josh Luckenbaugh accomplished the same feat in 2012.

DiGalbo earned All-PSAC East Second Team honors and was named the PSAC East Freshman of the Year in 2016.

On the ground, he holds four school-rushing records for a quarterback – touchdowns in a game (3) and season (8), longest run (82) and most rushing yards in a game (126). He has run for 659 career yards with 12 touchdowns. KU’s career QB records stand at 878 yards and 19 touchdowns.