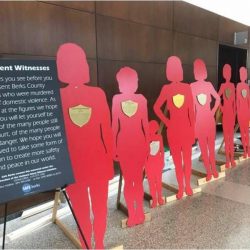 In observance of Domestic Violence Awareness Month, Safe Berks (formerly Berks Women in Crisis) will hold the 16th Annual Silent Witness Project March and Dedication on October 26th. The event will begin at the Safe Berks Center with a symbolic march, and the dedication will take place at the RACC Schmidt Training & Technology Center.

WHO:  Open to the Public

The Silent Witness Project is a display of life-sized silhouettes that honors the lives of Berks County women, men, and children who lost their lives due to domestic violence homicide. Each figure displays a shield on its chest that tells the story of their untimely death.

Prior to the Dedication, the public is invited to meet at the Safe Berks Center, 255 Chestnut Street, Reading, at 11:15 a.m. to participate in the Silent Witness March. Following the Dedication at RACC, a light lunch will be served.

This year’s Silent Witness Dedication will honor and mourn the loss of 56 people and one pet killed by domestic violence in Berks County since 1999, including the most recent tragedy, the murder of Nicole Monderewicz on January 5, 2017.