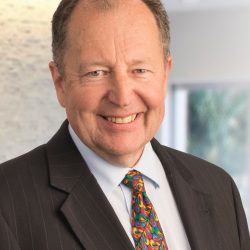 York, Pa. – Nearly 25 years ago, the Golden Venture, a freighter carrying 286 passengers, ran aground off the coast of Rockaway Beach in New York.

But that was far from the end of the journey of the Chinese refugees on that boat. And for Barley Snyder managing partner Jeff Lobach, it was just the start.

The Museum of Chinese in America (MOCA) in New York City has now devoted a full exhibit to that journey called, FOLD: Golden Venture Paper Sculptures. The exhibit features unique folk art created by the Chinese immigrants found in that ship while they were detained in York County Prison in southcentral Pennsylvania from 1993 to 1997. The exhibit considers past and current U.S. immigration policies and border control practices through refugees’ sculpture and “Qian Zhi” – a hybrid form of Chinese paper folding tradition.

Also featured in the exhibit is a historical video detailing the history of the Golden Venture immigrants. The video includes an interview with Lobach, then president of the York County Bar Association and one of the leaders of a group of central Pennsylvania attorneys that fought for the rights of the refugees through the bar association, which garnered state and national recognition for the effort.

The case drew headlines across the country and catapulted Lobach into the national spotlight. It also led to Barley Snyder establishing its thriving Immigration Practice Group and the founding of the Pennsylvania Immigration Resource Center, which provides refugees with immigration assistance from a staff of about four attorneys. The Golden Venture project remains the largest pro bono case ever undertaken by Barley Snyder and the York County bar, and one of the biggest – if not the biggest – pro bono immigration cases in United States history.

Lobach and his wife Cindy personally donated many of the exhibit pieces, and they attended the exhibit opening on Oct. 4. Nearly all 10,000 pieces of the art at one point passed through their home between 1993 and 1997 during the refugees’ imprisonment.

“To experience the exhibit, and to be part of it, is like walking back in time,” Lobach said. “Those years were very difficult for these refugees and for the attorneys involved who faced pressure not just locally, but nationally in their four-year struggle with the U.S. Department of Justice. But it was something we felt very strongly about, and I know it’s a challenge we’d quickly accept again. The exhibit does a wonderful job of capturing from every perspective the fight for the freedom of these refugees. It also asks questions that, frankly, still need to be asked in today’s America.”