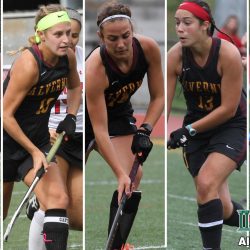 Taylor Dorrin had a standout junior season for the Golden Wolves, scoring four goals and seven assists. With seven assists, Dorrin is currently tied for sixth in the conference in assists. This is Dorrin’s first appearance on the conference team. During her sophomore season, Dorrin was named to the NFHCA National Academic Squad.

Joining Dorrin on the First Team is Erica Groves. At defender, Groves scored four goals and had six assists. This is the second time the sophomore has been named All-Conference, earning Second Team honors last year.

Earning Second Team honors is Andrea Wysocki. This is the second time the senior has been named to the All-Conference team, earning First Team honors her junior year. Wysocki has lead the Golden Wolves offensively, scoring 12 goals and four assists. She is currently ranked fifth in the conference in goals scored, and is ranked sixth in assists. Wysocki’s senior season has capped off an excellent career. She will finish in the top-ten all-time in goals scored and points, and in the top-15 all-time in assists.

Malorie McCoy caps off her senior year making her first All-Conference appearance as a Honorable Mention selection. McCoy is second on the team in goals scored (9), and is tied for third in the conference is game-winning goals (4).

Madison Potthoff is named Honorable Mention in her first year. At defender, Potthoff gathered three defensive saves, and scored a goal and three assists for the Golden Wolves.