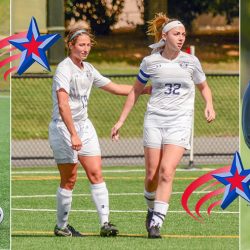 GANSEVOORT, N.Y. – The Penn State Berks women’s soccer team swept the individual awards and had five members named to the All-NEAC First Team and two on the Second Team, as announced by the league office on November 2.

Caitlin Golden was named the NEAC Women’s Soccer Player of the Year, joining Dana Sarcinello (four-time recipient) as the only members of the women’s program to earn the award. Megan Jardine was selected the NEAC Defensive Player of the Year, marking the second straight year a Berks defender won the award after Brennan Moyer claimed the honor in 2016. Melissa Martin garnered the NEAC Rookie of the Year honors, which is the fifth Berks player to receive the award. Adrian Munteanu was selected by his peers as the NEAC Coach of the Year, which is the fifth time that he has earned the distinction.

Golden and Jardine were named to the All-NEAC First Team and were joined on their by Shelby Baker, Charlotte Pizzuto, and Karina Raykova. Martin and  Paige Elmy were All-NEAC Second Team selections to round out the Nittany Lions players receiving awards.

Golden, who was previously a two-time first team selection and Rookie of the Year recipient, has led the Nittany Lions offense this season. The junior forward has started and played in all 19 contests. She leads the NEAC in goals scored (22) and points (55), while ranking third in the conference in assists (11). Golden is ranked sixth in the nation for points and her goal total is the eighth highest in all of Division III. She has scored at least one goal in 13 contests this season and has recorded six multi-goal scoring matches. Golden has tallied at least one goal in the Nittany Lions in each game of the Nittany Lions current seven-game winning streak.

Jardine, who was named to the All-NEAC Third Team as a freshman, has been an impact player on both offense and defense. Jardine is tied for first in the NEAC with 14 assists, while ranking seventh in points (36) and eighth in goals scored (11). Jardine has recorded three game-winning goals, including the winning tally in a victory over the University of Scranton, who is No. 4 in the Mideast Regional ranking. Jardine’s strong play in the midfield is vital in keeping possession in Berks’ favor and limiting scoring opportunities by the opposing offense. With Jardine controlling the midfield, the Nittany Lions defense has surrendered just 12 goals and have allowed only 71 shots on goal.

Martin has been a strong scoring threat for the Nittany Lions this season. The forward has scored 18 goals and added six assists for 42 points this season. She does her scoring in bunches, as she has recorded two or three goals in six contests and recorded just one goal in two matches. Martin ranks fifth in the conference with her 18 goals, while her 42 points are tied for the third most in the NEAC. Martin has tallied three game-winning goals, two against conference opponents. Martin utilizes her speed and high soccer IQ to put herself in the position to find scoring opportunities. She has made 12 starts and made appearances in 16 contests this season.

Baker receives first team honors for the first time in her career after previously being named to the second team in 2016. This marks the first time that Pizzuto, Raykova, and Elmy have earned all-conference recognition. These four members have been vital pieces to the Nittany Lions stingy defense that has allowed just 12 goals and sports a 0.62 goals against average. They have recorded 11 shutouts and have held opponents to only 71 shots on goal. Elmy ranks 38th in the country with her 0.61 goals against average, while her .850 save percentage is 58th in all of Division III. Elmy had a career-high 17 saves in a 1-0 setback to Dickinson College earlier in the season.

Munteanu nabs the Coach of the Year honors after guiding his team to its sixth straight NEAC Regular Season Championship title. He currently holds an overall record of 13-5-1 and the team finished 10-0 in NEAC play. Munteanu reached double-digits in wins for the sixth straight season and eighth time in the last nine years to improve his overall record to 133-60-9.

The Nittany Lions blanked Penn State Abington in the NEAC Quarterfinal round on Tuesday afternoon and will now host the semifinal and championship rounds this weekend. Berks will take on Bryn Athyn College on Saturday, November 4 at 2:30 p.m., followed by Penn College and SUNY Polytechnic at 5 p.m. in the other semifinal round contest. The winners of both semifinal will face each other in the NEAC Championship on Sunday, November 5 at 2 p.m.