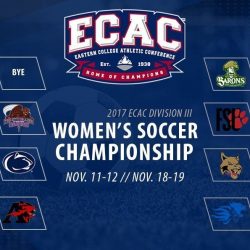 DANBURY, Conn. – The Albright Lions women’s soccer team will host the first two rounds of pod 4 in the ECAC Tournament, announced on Nov. 6 by the conference.

Pod 4 consists of four teams. Lebanon Valley is the top seed in the pod, and will face fourth-seeded Penn State Harrisburg at 5:30 p.m. on Saturday, November 11. Albright, the host, is seeded second and will play third-seeded Juniata on Saturday at 8 p.m. after the first game. The winners of those two matches will face each other on Sunday afternoon at a time to be determined.

The champion of the pod will advance to the semifinal rounds of the tournament to be played on Saturday, November 18.

Albright enters Saturday’s match with a 10-8-1 overall record and a 4-3-1 mark in MAC Commonwealth play.

This marks Albright’s second straight appearance in the ECAC tournament after they hosted an opening region last season.

The Lions are led by a pair of juniors who made the All-MAC Commonwealth first team in defender Erica Bross and goalkeeper Alexis Tunney. Senior Crissy Terraces earned second-team honors after leading the team with six goals and five of them being game-winners.