Beware and Aware of Deer on Roads : Four Simple Tips to Avoid Collisions 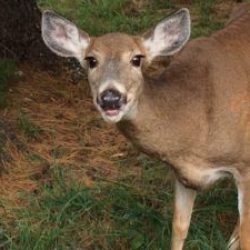 If you’re one of the millions of drivers on Pennsylvania roads, you’ve undoubtedly seen many dead deer in recent weeks.  The numbers are going to increase with the rut beginning for bucks who are now chasing does.  This is the time of the year for the fall breeding season.  Bucks become oblivious to their surrounding as they begin “the chase” when they follow does in an attempt to breed with them.  Some have trailed does for miles to be with them.   Bucks will fight with other bucks or run them off for a doe.  There are only a certain number of receptive does for all the bucks and their raging hormones.

As bucks chase the does, the females will only be receptive when they come into “heat”/ ready to breed which typically lasts 24-48 hours. In the interim, does run onto roads to escape the bucks leading to collisions with cars.  Deer lose their lives as cars can be demolished with motorists sometimes injured.    I recently took some great footage of a buck chasing other bucks away as he claims dominance over the doe he has been trailing.  I also was able to get amazing footage of a buck running a doe as the car I was in kept up with them.

Two of my cars were involved in deer crashes with me being a passenger in one and the driver in the other. The first time occurred at night with my late sister, Teresa, at the wheel.  The headlights were our only means of seeing the road.   I saw this quick flash in front of my car not knowing what it was.  As Teresa drove the car to the shoulder of the road,  smoke began filtering the air. The front of my car was demolished.   But, how? There was nothing or no one near the car. As I walked the shoulder,  the  deceased six-point buck lay approximately 100 yards away.  Luckily, my car was able to be repaired.   This was my first deer collision but it wasn’t my last.

You don’t have to make out a report with the Pennsylvania Game Commission (PGC) when you kill a deer with your vehicle unless you plan to keep the carcass.  Only PA residents are allowed to do this. You must call within 24 hours of killing it.  You must contact the PGC if  you want to keep the antlers.   You will be charged for this.

Sadly, I was driving when another buck who came out of nowhere again and hit the front end of my (different) car. Despite occurring during daylight hours, it was a blur. There were only two lanes and each was full of people driving home from work.  There was no room to swerve.  I couldn’t believe my eyes as I watched a deer flip over the hood of my car and onto the other side of the road.  I pulled off to the side of the road with two other drivers doing the same thing.   I didn’t know the men but thankfully they helped me.  I watched as this helpless eight-point buck swerved his head from left to right.  He was dying in front of my eyes.  The men kept me from the buck when I wanted to go to him (which is a monumental foolish mistake!)  An injured or dying buck can kick and cause great harm.  A period of five minutes passed when the buck took his last breath.

As stunned as I was, we had to get out of this high volume traffic area.  The men wanted the carcass, and in PA, other drivers are allowed to keep it if the person who hit the deer doesn’t want it.  I didn’t.  So, they took care of the buck.  A relative of mine took the carcass of the first buck.  Despite the larger size buck, there was little damage done to my car – a dent on the hood and a broken headlight.

Both accidents occurred during the fall mating season. The worst time for accidents with deer is dusk and dawn. With daylight savings time, there will be more automobiles on the road during those hours.

NOW is the time to really be careful on the roads.   Pennsylvania ranks near the top of the list of states for collisions with deer on the roads. There is a 1 in 63 chance of experiencing a collision with a deer.  That is an increase of 6.3%  from 2016.  When you see deer crossing signs, heed the warnings!

When you see a deer crossing sign, slow your speed.  You should drive slower than usual right now especially on country roads.  When deer are crossing roads, they travel single file and in packs.   If you see a deer, stop and wait to see if others are following.  Deer are most active at dusk and dawn when it’s more visually difficult to see. Slow down and stay alert!!!!  Honk your horn in short bursts.  It may scare a deer away but not guaranteed to work.  Use caution when engaged in doing this if other cars are in the area. Deer whistles haven’t proven to be effective.

To report a dead deer for removal from state roads, motorists can call the Pennsylvania Department of Transportation at 1-800-FIX-ROAD.

If you plan to keep a deer carcass,  those who take possession need to be advised of chronic wasting disease (CWD).  CWD affects the brain and nervous system of infected deer, elk and moose eventually resulting in death, according to the  PGC.  CWD prohibits the removal of high-risk deer parts, the head and backbone from any established Disease Management Area.