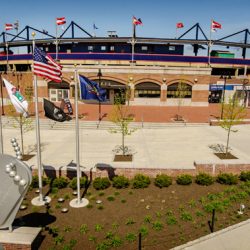 On Saturday, November 11, the Reading Fightins, Double-A affiliate of the Philadelphia Phillies, and Savage 61 Chrysler Dodge Jeep Ram will be presenting the Veterans Day Wreath Ceremony in front of the Veterans Monument at FirstEnergy Stadium at 1 p.m.

During the event, American Legion Gregg Post 12 will be laying a wreath in front of the ballpark’s dog tag monument, which pays tribute to the members of the United States military who made sacrifices to protect the United States of America. Among the guests that will be on hand are Fightins General Manager Scott Hunsicker and other local community leaders.

Following the event, there will be light refreshments in the Steve Moyer Subaru Team Store.

Over the years, the Reading Fightins have continued to discover new ways to honor Berks County’s veterans. Originally named Reading Municipal Memorial Stadium, FirstEnergy Stadium was completed in 1951 and was named in honor of the servicemen and women who risked their lives in defense of their country. 48 years later in 1999, a statue in the form of giant dog tags was placed in front of FirstEnergy Stadium in a special rededication ceremony to honor the area’s veterans.

Beginning with the 2014 season, the Fightins honored a specific veteran each game with a Ceremonial Flag Service. In 2016, the club added Living World War II veterans to the recognition ceremony. The flag flies by the giant dog tags at the stadium’s main entrance, lowered, and then given to the veteran’s family following the game.

Prior to Opening Night of the 2016 season, the Fightin Phils unveiled a permanently unoccupied black seat in FirstEnergy Stadium that was dedicated to those who did not return home during active duty.

The empty seat pays tribute to over 91,000 military service personnel who were prisoners of war or have been declared missing in action (MIA). The Fightins now have a chair in FirstEnergy Stadium that will serve as a permanent memorial to those who sacrificed time and lives for our country.