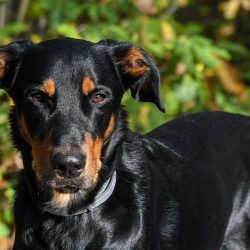 Reading, Pa. – Albright College researchers want to help ensure every dog has its day – for adoption.

With millions of dogs entering animal shelters annually, and hundreds of thousands ultimately euthanized, Albright alumna Sara Isgate ’16, and associate professor of psychology Justin Couchman, Ph.D., teamed up to look at how marketing and advertising dogs through photographs may help these pups find new homes. The researchers wondered if a dog’s pose in a photograph – especially for breeds stigmatized as aggressive – influenced how the pooch is perceived? And is there a favored pose to make the dog more appealing and thus more adoptable?

Turns out the answer is yes. The researchers found that regardless of breed, a dog sitting alone is considered a more favorable pose. The findings, recently published in the Journal of Applied Animal Welfare Science, could have significant implications for advertising and marketing dogs in animal shelters, said Isgate and Couchman.

“I think online marketability is one of the strongest assets shelters may be able to use when advertising adoptable animals,” said Isgate. “If shelters can come up with more creative, approachable ways to pose their animals, especially those that may be considered ‘bully breeds,’ it may be the difference between life and death for dogs in overcrowded shelters.”

The study focused on four breeds – Doberman pinscher, pit bull, rottweiler and golden retriever. The former three are often stereotyped as aggressive. The dogs were photographed in four different positions – sitting alone, standing alone, sitting with a male handler, and walking on a leash with a male handler.

Human participants then examined each set of photos on a computer screen while infrared beams tracked their eye movements, measuring where they looked, for how long, in what order, and how often. The four most prominent areas of interest to participants were the human’s head, and the dog’s face, eyes and mouth.

Participants also rated each photograph on the characteristics of friendliness, aggressiveness and adoptability.

Based on the ratings and data from the eye scans, the researchers found that overall the golden retriever – a breed adored by many – was viewed as most adoptable. But the results also indicated that pose made a significant difference in people’s perception of the other breeds, with particular appeal for dogs sitting alone. Pose, it turned out, was more significant than breed.

“Specifically with the pit bull, the highest rating was sitting alone with mouth closed. It had the highest adoptability and lowest aggression,” said Couchman, who believes that a dog sitting alone may imply discipline and obedience.

Isgate, who devised the research while studying psychobiology and evolution and animal behavior at Albright, was inspired by the photography of Sophie Gamand, who is famous for adorning the heads of pit bulls with flowers in an attempt to expose the prejudice the breed faces.

“By producing high-quality images that elicit an emotional response, I think shelters may be able to resonate more with the public to place more dogs in loving homes,” said Isgate.