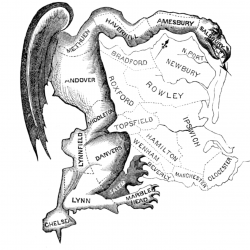 From Wikipedia: The word gerrymander (originally written Gerry-mander) was used for the first time in the Boston Gazette on 26 March 1812. The word was created in reaction to a redrawing of Massachusetts state senate election districts under Governor Elbridge Gerry (pronounced /ˈɡɛri/; 1744–1814). In 1812, Governor Gerry signed a bill that redistricted Massachusetts to benefit his Democratic-Republican Party. When mapped, one of the contorted districts in the Boston area was said to resemble the shape of a salamander.
You May Also Like
Facebook Twitter Pinterest Email
Share

Stack, who is a defendant in the suit brought by the League of Women Voters and constituents in gerrymandered congressional districts, had urged the court in a September filing to allow the suit to proceed.

“Delaying this case for any reason is denying citizens their right to free and fair elections,” Stack said. “This case will lay bare the partisan motivation behind the drawing of the 2011 map and potentially force a changed landscape for 2018.”

By a 4-3 vote, the state’s top court today ordered Commonwealth Court to deliver its findings of fact and ruling by Dec. 31.

The League of Women Voters and constituents in several of the most gerrymandered congressional districts filed the suit in June, but legislative Republican leaders had asked the court to delay consideration in lieu of a likely U.S. Supreme Court decision on Whitford v. Gill, a federal lawsuit filed in Wisconsin.

In a reply filed with the court, Stack’s lawyers told the court that the federal case has no bearing on the state suit, which is citing violations of a state constitution “that has consistently extended greater protections than the federal constitution.”

Stack, who was a Senator representing Philadelphia in 2011, said Democrats were cut out of the redistricting process while GOP leaders contorted the districts to retain partisan advantage.