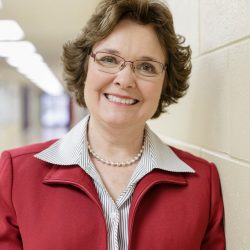 (Reading, PA) — Nominated by Tower Health and announced in Harrisburg, Nov. 3, Karen S. Thacker, Ph.D., RN, CNE, has been named the Nursing Education Nightingale Award of Pennsylvania winner for 2017. Thacker is dean of the College of Professional Programs at Alvernia University and an associate professor of nursing.

Individuals nominated for the Nursing Education Nightingale Award of Pennsylvania demonstrate the ability to inspire nursing students and practicing nurses, and creatively stimulate students and colleagues to pursue knowledge and skills needed to practice nursing compassionately and effectively.

After reaching a 25-year milestone of teaching at Alvernia last year, Thacker penned a reflection on the history of the university’s 40-year-old nursing program.

“After four decades and tremendous growth, all levels of programming continue to center on Alvernia’s mission, guided by Franciscan values,” said Thacker. “Alvernia nursing graduates have responded to our nation’s health care needs by becoming highly skilled, highly educated values-based practitioners and leaders at all levels in the healthcare continuum.”

More than 100 nominations were received in nine categories for 2017 Nightingale Awards, and Thacker was chosen from three finalists. A gala celebrating winners and finalists was held in Harrisburg, Nov. 3, attended by Alvernia alumni, faculty and nursing professionals from across the state.