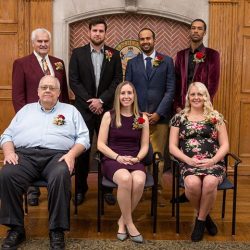 KUTZTOWN, Pa. – Kutztown University inducted its 2017 and 39th annual class into its Athletics Hall of Fame on Saturday, November 11. Seven inductees joined the Hall in front of a capacity crowd at the induction ceremony, held at the Georgian Room of Old Main.

In addition, the seven new inductees were introduced at the pre-game coin toss of KU’s home football game against Slippery Rock University at Andre Reed Stadium.

The seven new inductees increase the membership to 206 since the Hall of Fame was formed in 1977.

Profiles on the seven newly-inducted hall of fame members:

Stephen Dennis was the 2010 National Player of the Year and is the all-time leading scorer in KU men’s basketball history. He scored 2,406 career points at KU, third in PSAC history, an average of 20.4 per game. Dennis graduated with eight school-records and led KU to three PSAC East titles and two NCAA Tournament appearances.

In addition to setting the all-time Kutztown scoring record, Dennis established program records in career field goals (850), free throws (621) and assists (447). He also set the KU single season scoring and field goal records in two consecutive seasons. His senior year total of 817 points surpassed the 710 he posted as a junior.

Dennis has played overseas in Germany, Australia and the last two seasons in Israel.

Hahn spent 27 years as an assistant coach for the Golden Bear basketball teams – 10 with the men’s program and 17 with the women’s program.

While the men’s assistant coach from 1986-95, the Golden Bears advanced to the PSAC finals and earned the school’s first-ever invitation to the NCAA Division II Tournament.

Hahn remained the women’s assistant coach for 17 seasons from 1995-2012. He helped lead Kutztown back to the postseason for the first time in five years, including the program’s first and only NCAA Tournament appearance. The Golden Bears went on to post seven-straight winning seasons and qualified for the PSAC Tournament in 14-of-17 seasons with Hahn as an assistant.

Hahn closed his coaching career as an assistant to men’s head coach Bernie Driscoll for the 2012-13 campaign.

During his tenure, Hahn guided 10 KU Hall of Famers – three men and seven women, including one women’s lacrosse player – and the first All-American for the men’s basketball program. His players broke and still hold school-records today.

Off the court, Hahn has been an active contributor to the athletic and campus community. Beginning in the late 1990’s, Hahn served as the color commentator on KU’s football and men’s basketball broadcasts – a position he volunteered in for more than 10 years. He has also been a member of the National Association of Basketball Coaches (NABC) for more than 35 years.

In 2002, he helped negotiate the first collective bargaining agreement between the State System and the PSAC coaches. Continuing to give back to the department, Hahn established an endowed scholarship for women’s basketball in 2002.

After coaching, Hahn remained active in the department as the Assistant to the Athletic Director for Student Development & Compliance. He also served on the committee that selected KU’s All-Time Football Team in 2015 as part of the university’s 100th Season of Football.

Prior to KU, Hahn served as head coach of boys’ basketball at Reading High School and posted a 43-15 record. Hahn owns a bachelor’s degree from Albright and a master’s degree from Temple.

Healey was a four-time All-America and All-PSAC selection, including First Team honors her final two years. She graduated with a 3.94 GPA, was an Academic All-America Second Team honoree and a two-time PSAC Top-10 award winner as a biology major.

The Toms River, N.J., native graduated second in program history with 161 career points and 61 career goals, while holding the record with 39 career assists. For a season, Healey graduated with a school-record 14 assists and a six-game scoring streak in her junior year in 2007.

She was the 2005 PSAC Rookie of the Year, and was a four-year PSAC Scholar-Athlete and NFHCA All-Academic Squad honoree.

Healey married fellow KU alum, Stephen Krater in 2015, and went on to earn her Ph.D. in microbiology and immunology from Drexel University College of Medicine. She currently works as a postdoctoral fellow and adjunct professor at the Rutgers Biomedical and Health Sciences department. She has been honored as a 2014 Amadeo Bondi Endowed Graduate Award Finalist and a 2015 Arnold O. Beckman Postdoctoral Fellowship awardee.

Jeppesen was a four-time All-American and holds the most school-record times with eight, four in individual events and four in relays.

She helped the KU women’s swimming team enjoy its best season in school history in 2009-10. The Golden Bears finished fourth as a team at the PSAC Championships, and 16th at nationals. The Golden Bears also set a school-record for wins with 15.

She was voted the 2010 KU Female Athlete and Senior Athlete of the Year.

After graduating from Kutztown, Jeppesen continued her swimming career by trying out for Denmark’s national team. A native of Denmark, Jeppesen was recruited to try out for the 2012 Olympic Team. At Denmark’s Olympic Trials, she finished fourth overall in the 100- and 200-breaststroke, and the 200-IM, only narrowly missing their Olympic team cutoff.

She is currently a swimming coach at the Greater Philadelphia Aquatic Club. She and her husband, Kevin, are expecting their first child in January 2018.

McCardell, a first-baseman/right-handed pitcher for the KU baseball team from 2004-07, was a two-time all-region pick, by both Daktronics and the ABCA, and two-time First Team All-PSAC East selection as a pitcher and infielder.  He was named the ABCA North Atlantic Region Pitcher of the Year and the ABCA/Rawlings Golden Glove pitcher for the region in 2007 and was the 2006 PSAC East Pitcher of the Year.

McCardell was drafted in the sixth round of the 2007 Major League Baseball Draft by the Minnesota Twins and made his professional debut in the summer of 2007. He reported to the Gulf Coast League Twins and was 2-0 with a 2.50 ERA and had 25 strikeouts in 18 innings.

He was quickly promoted to the high-rookie ball Elizabethton Twins, where he had a 5-1 record and 2.00 ERA in eight starts. In 45 innings, McCardell fanned 70 batters, with opponents hitting .179 against him. Between the two levels, he compiled an impressive 102-9 strikeout to walk ratio. McCardell peaked in Double-A ball with the New Britain Rock Cats in 2010.

He and his wife, Rachel, have a daughter, Reese. He currently works for the All-Star Baseball Academy in West Chester.

Nandakumar is the first men’s tennis player to be inducted into the KU Athletics Hall of Fame. He is the school-record holder with 141 combined career victories, as he primarily played his matches at No. 1 singles and No. 1 doubles. He won 78 career doubles matches for the most all-time at KU in men’s tennis, and his 63 career singles victories are fourth in school history.

In his senior year in 2005, he was named the PSAC Player of the Year and the ITA Senior Athlete of the Year. Nandakumar was named the 2002 PSAC and NCAA East Region Rookie of the Year. He was the 2004 PSAC Singles and Doubles Champion and is a three-time All-PSAC first team selection (2002, 2003, 2004). He won the 2002 and 2003 ITA East Regional Flight A Doubles championship, and earned a trip to the ITA Small Colleges Championships in both years, placing eighth in 2003.

A native of Chennai, India, Nandakumar and his wife, Jharna, have one daughter. He is currently the marketing manager of the Julian Krinsky Group.

He won his first conference title in 1963, winning the triple jump at 44-1 to mark the first conference champion for Kutztown since the mid-1930s in any sport. The team was eighth that year, as Scheks was the only point-scorer.

Scheks, a native of Hellertown, repeated as champion in the triple jump in 1964 with his mark of 44-2.25. The team improved to seventh place in 1964, with Scheks remaining as the lone point-scorer. He also competed in the 1965 PSAC Championships as a senior, despite having a broken foot.

Scheks was known more for the versatility in dual meets than his accomplishments in the PSAC Championships. He once entered 12 events – 10 individual and two relays – winning most of them. He scored first place at least once in 10 different individual events and three relays during his Kutztown track & field career.

At graduation, he held six individual school records and was part of three different relay  records. His forte would have been the decathlon, which did not yet exist in the PSAC program.

After his time at KU, Scheks worked for the Pleasant Valley School District and was the Art Department Head for 30 years. He started Pleasant Valley’s wrestling and track & field programs, coaching the two sports for seven and 23 years, respectively.

He and his wife, Judy, are proud parents of four children and eight grandchildren