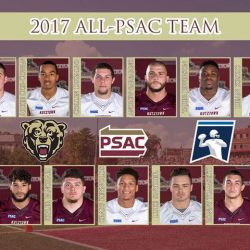 KUTZTOWN, Pa. – Following its fourth consecutive winning season under the direction of head coach Jim Clements, 11 members of the Kutztown University football team have been honored by the Pennsylvania State Athletic Conference (PSAC) as All-Conference selections, announced on November 15.

KU’s 11 honorees are tied for the third-most in program history, matching the 11 selections from last year’s team.

Of the 11 selected, seven are underclassmen and will return to the Maroon and Gold for the 2018 season.

Reynolds continued to shine in his second season as the feature back in G.A. Mangus‘s high-powered offensive attack. A 2017 team captain, the Abington-prep racked up 100 or more all-purpose yards in each of Kutztown’s first four games, scoring a combined 10 touchdowns in those four contests. Reynolds, who was hampered by injuries down the stretch, still finished the season with 1,127 all-purpose yards, earning his second consecutive First Team All-PSAC East selection.

In his season debut against Assumption College on Sept. 2, Reynolds showed his ‘swiss army knife’ capabilities, rushing for 133 yards, catching five balls for 34 yards and accumulating 168 yards in the return game for a combined 335 all-purpose yards. The Willow Grove-native earned his first PSAC East Athlete of the Week selection (Sept. 4) following this performance, an award he garnered for a second time on Sept. 25 for his role in the Golden Bears’ 41-21 win over Millersville University.

A well-rounded tackle, Panchari anchored the offensive line for a KU attack that ranked fifth in total offense in the PSAC. Additionally, Kutztown had two games of 60-plus points this season for the first time in school history. The Pottsville-native started in all 11 games for the Golden Bears for a unit that surrendered just 18 sacks, seventh-best in the PSAC.

The senior even found his way into the end zone, converting on a two-yard rushing attempt against Lock Haven University on Oct. 21. For his career, the Blue Mountain-prep appeared in 42-of-44 games and was a part of many notable offensive performances, a school-record 459 yards against East Stroudsburg in 2016 and the single-season total offense record in 2015. A business administration major, Panchari is also a two-time PSAC Scholar-Athlete.

Primarily a blocker in his first three seasons as a Golden Bear, Garbarino added to his skillset, making an impact in the passing game in his senior season. The Peckville-native caught six passes for 92 receiving yards and touchdown in 2017, after being blanked in each of these three categories in his first three seasons. Appearing in 43-of-44 games in his career and a four-year starter at tight end, Garbarino was also an integral member of the KU special teams unit, recording three tackles and one kick return for seven yards.

Starting in 24 career games, the Valley View-prep was an asset blocking in the run game, for a Kutztown offense which averaged 170.4 yards per game on the ground. A business administration major, Garbarino received Dean’s List Honors for the Spring 2017 semester.

Tomasetti excelled as an edge-rusher throughout his four-year career, earning his second All-PSAC selection in his senior season. On Sept. 2 versus Assumption, the Dickson City-native delivered a career-best performance, registering six tackles, two sacks and a forced fumble. For the season, Tomasetti recorded 10 tackles-for-loss and 4.5 sacks, racking up 23 tackles for a stingy KU defensive unit which surrendered 19.5 points per game, third best in the PSAC. A 2017 team captain, Tomasetti rushed twice for four yards and a touchdown against Cheyney on Nov. 4.

The Mid-Valley-prep ends his illustrious career in Maroon and Gold starting 42-of-44 games, including 25 consecutive starts, racking up 35 tackles for loss and 19.5 sacks, tied for fifth all-time.

As the ‘man in the middle’, Jefferson collected a team-high 86 tackles, 12.5 of which went for loss, two interceptions and four forced fumbles (4th in PSAC) in his third season as a starter for KU. In Kutztown’s game versus Assumption on Sept. 2, the Queen of Peace-prep racked up a career-high 15 tackles, a forced fumble and an interception.

Headed into his senior campaign, the East Orange, N.J.-native has amassed 236 tackles and 37.5 TFLs with 7.5 sacks, starting in 30 consecutive games. The selection for Jefferson is the third of his career and he will have the opportunity to complete the rare career-sweep as a four-time All-PSAC award-winner in 2018.

Cox-Cowan rounds out the KU selections on the first team, following a banner year as a cornerback in the Maroon and Gold’s secondary. As a sophomore, the Harrisburg-native broke up 17 passes and had three interceptions. His 20 passes defended were a school-record and ranked second in the PSAC. Collectively, the defensive unit had 18 combined interceptions, limiting opposing quarterbacks to 5.8 yards per completion and 198.5 passing yards per game.

In his second season at quarterback for the Golden Bears, DiGalbo appeared in 10 games, starting nine of them. After going 6-1 as a starter in 2016, DiGalbo went 6-3 this season before getting injured against Shippensburg on Oct. 28, running his career record to 12-4. The Secane-native passed for 1,976 yards and 19 touchdowns, adding 265 yards and four TDs on the ground. DiGalbo’s 265 rushing yards this season ranked second in the PSAC among quarterbacks and he has accumulated 686 yards on the ground in his two-year career.

Headed into his junior season, the Monsignor Bonner-prep will look for his third consecutive All-PSAC selection, earning Second Team honors each of the past two seasons. DiGalbo currently holds a litany of school-records, including the longest run (82), most rushing yards (126) and most rushing TDs (3) in a single game by a quarterback.

As a sophomore, Cella started in all 11 games for the Maroon and Gold after appearing in nine games in his freshman season. A true ‘road-grader’, the Springfield-native paved the way for KU’s high-powered attack, which ranked fifth in the PSAC in total offense. Blocking for a collection of Reynolds, DiGalbo, Evan Culver (Hellertown, Pa./Saucon Valley) and Abdul Hassan-Neblett, Cella and the offensive line opened holes for a running game which accumulated 1,874 yards, averaging 4.3 yards per carry.

Snyder, a sophomore linebacker, played in eight games for the Golden Bears, registering 44 tackles and 5.5 tackles for loss. The duo of Snyder and Jefferson made up Kutztown’s tag-team at the linebacker position for a scoring defense that ranked third in the PSAC. As a team, the Maroon and Gold gave up just 2.9 yards per carry and 11 touchdowns on the ground this season, both of which rank among the PSAC’s best. Snyder posted at least five tackles in each of the first six games of the season, before his season was cut short due to injury.

At the ‘Rover’ position on the Golden Bear defense, Nieves played the hybrid safety-linebacker position effectively for KU, ranking second on the team with 81 tackles, eight tackles-for-loss, four sacks and three forced fumbles. In a standout performance against Shippensburg on Oct. 28, Nieves racked up a career-high 16 tackles, one sack and one forced fumble, earning him player of the game honors. As part of a unit which ranked in the top-four in the PSAC in both interceptions and sacks, Nieves posted career-highs in nearly every major defensive category in his final season in Maroon and Gold.

A redshirt-freshman, Krcic racked up a punting average of 42.3 yards per punt, which ranked third in the the PSAC, 10th in Division II and second in school history. The Saylorsburg-native had 17-of-47 punts downed inside the 20 and 12 punts of 50-plus yards. Recording a long of 62 yards, Krcic amassed 1,988 yards in his first year as the Golden Bear punter.