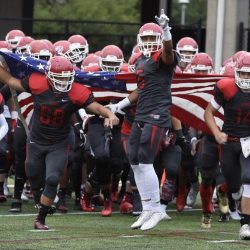 ANNVILLE, Pa. – The Albright Lions football program had 10 players earn 12 All-Middle Atlantic Conference Team accolades as voted on by the leagues head coaches, as announced by the league on Tuesday morning.

Jackson has played in all 10 games this season for the Lions as a wide receiver. He has 801 receiving yards which leads the team and ranks seventh-best in the conference. Jackson finished second on the team with 51 receptions and five touchdown catches. Jackson hauled in a career-high 130 receiving yards against Wilkes this season.

Goetz has once again been clutch for the Lions making nine field goals, which is the fourth-highest in the conference despite missing two games this season. In addition to his field goal kicking, Goetz is also fourth in the conference with averaging a career best 38.5 yards per punt. The junior kicker also aids Albright’s defense on kickoffs as Goetz has averaged 58.5 yards to keep opponents from breaking a long return.

In his final season at Albright, Boehler put up the best numbers of his collegiate career. The senior has made a career best 74 tackles to lead the team in the regular season, along with one sack in 10 games. In back-to-back games, Boehler recorded a season best 11 tackles twice this season against Salisbury and Lebanon Valley, respectively. He also registered a career-high four interceptions in the regular season, which ranked second best on the team and tied for fifth in the conference. In the team’s win over Misericordia, Boehler recorded two interceptions. He was also a force one special teams this season as he blocked a punt against Widener.

Isaac put together another solid season in the Lions secondary this season by leading the team with six pass break ups. He also posted 42 tackles on the regular season with three of them coming for loss, and recovered one fumble. Isaac’s play made opposing quarterbacks shy away from throwing to his side of the field.

Cordero also put up career best numbers as well in his final season at Albright with 526 receiving yards and three touchdowns in 10 games. His receiving were the second highest in the conference among tight ends, and touchdowns were third best in the conference among the position. He recorded a career-high 84 yards against Stevenson, and pulled down a season-high seven receptions twice this season.

Dickerson has done a little of everything for the Lions this season. Dickerson ranks second in the MAC with 1,397 all-purpose yards, while ranking third on the team with a career high 617 receiving yards with three touchdown receptions, and leading the team with 55 catches in 10 games. Against Wilkes, Dickerson posted career-highs with 11 receptions and 122 receiving yards. He is also the only player in the MAC to have a touchdown reception, rushing touchdown, and passing touchdown this season. Dickerson has also established himself as one of the most dangerous returners in the conference with 414 kick return yards and 295 punt return yards. His special team presence was most notable with an 80-yard punt return for a touchdown against FDU-Florham.

Boyce put together his best season at Albright in 2017 by leading the team and tying for first in the MAC with six interceptions. He tallied 45 tackles with four of them coming for loss, and posted four pass break-ups as well. He grabbed two interceptions against Stevenson, and recently earned MAC Defensive Player of the Week honors for his efforts against Lebanon Valley. Boyce tallied one interception and recovered a fumble in the Lions win over the Dutchmen this past Saturday.

Jordan had a breakout season at the wide receiver position with 692 yards receiving and a team-high eight touchdown receptions. He tied for third in the conference in touchdown receptions, and ranked second on the team in receiving yards. Jordan got off to a red hot start to the season by catching six touchdown passes in the Lions first three games of the season. He also recently established a career-high with 102 receiving yards against Lebanon Valley last Saturday.