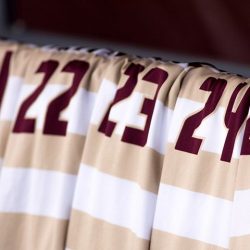 KUTZTOWN, Pa. – The accolades continued to come in for the Kutztown University women’s soccer team. Senior Morgan Staley and sophomores Maddie Mohr and Emily Zwiercan  were recently named to the women’s soccer All-Atlantic Region First Team on Nov. 15, sponsored by the Division II Conference Commissioners Association (D2CCA) and voted on by the region’s sports information directors.

The First Team trio now moves on to the All-America ballot.

Along with her first-team honors, Zwiercan was tabbed the Atlantic-Region Player of the Year. It was her first career First Team All-Region accolade. She was also named the Pennsylvania State Athletic Conference (PSAC) Athlete of the Year.

Zwiercan was named to the CoSIDA Academic All-District team this season. The First Team All-PSAC performer is a two-time Dean’s List member and was a PSAC Scholar-Athlete honoree last season.

Zwiercan is fourth in program history with 15 career assists, and is 10th in career points with 53.

Staley earned All-Atlantic Region honors for the first time. She was named to the 2017 All-PSAC First Team and a CoSIDA Academic All-District honoree.

The defender and two-year captain started 20 of 21 games this season and played in 68 games over her career. She was the back bone of a defense that completed 11 shutouts on the season and given up just 14 goals in 21 games. She also tallied two goals and one assist on the year.

It is the second consecutive year that Mohr has been voted to the All-Atlantic Region First Team. The All-PSAC First-Teamer finished the year tied for the team-lead with 14 goals (third in PSAC) and 28 points (fifth).

Mohr is seventh in program history with 25 career goals.

The Golden Bears finished the 2017 season 16-4-1, tied for the second most wins in program history. They made their seventh NCAA Tournament appearance in the last nine years, falling in the Atlantic Region First Round 2-1 to Notre Dame (OH).