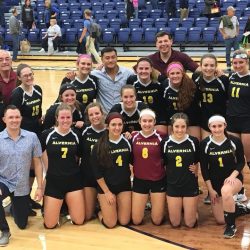 Imagine this, it’s the fifth set of the conference quarterfinal volleyball game, your team is up 14-13 against the higher ranked Messiah College who you lost to earlier this season, you’re in the conference playoffs for the first time since joining the conference, and the next point decides it all. That was the story of the Alvernia University women’s volleyball team this season. The team, which I am apart of, advanced to the Middle Atlantic Conference (MAC) playoffs for the first time since joining the conference in 2009.  Here’s a recap of the record-breaking season for the Golden Wolves.Regular Season: In the inaugural season, the women’s volleyball team was the first team as Golden Wolves to win with their five set victory over Moravian College, who they have not beaten since 2005. In that match, two records were beaten: Senior Kristen Sipling beat Hall of Famer Kindra Lewis for the most kills in a five set match with 32 kills, and junior Abby O’Donnell set the new record for assists in a five set match with 62 assists. The Golden Wolves opened conference play with a 3-0 win over Lycoming College and lost the following week to Messiah College 1-3. The team bounced back the next two weeks topping Hood College and Widener University 3-1. The following weeks of conference play included 0-3 losses to Arcadia University, Lebanon Valley College, and Stevenson University. The last conference game of the regular season was against cross-town rival Albright College. If the Golden Wolves prevailed they would make the MAC playoffs, and sure enough we won 3-0. “It’s amazing to see that hardwork does pay off and that it is possible to come together as a team and make postseason,” Sipling said.MAC Playoffs: Alvernia joined the MAC in 2009, and the women’s volleyball team had not advanced to the playoffs since joining. This year, this team, it was something special. After winning against Albright for Senior Night and going 4-4 for conference play, the Golden wolves earned a berth in the postseason being ranked #5 – the last team to make the tournament. The stage was set, and that stage was playing #4 Messiah College at their home court. The Golden Wolves had a 0-7 record against Messiah College going into the season and 0-8 going into this game having lost in the regular season. Both teams came out strong, but the Golden Wolves pulled ahead taking set one, 25-21. The Falcons of Messiah College retaliated and won set two with the same score, but in their favor, 21-25. The Golden Wolves took the court for the start of set three but missing a key player, setter Abby O’Donnell. O’Donnell severely injured her hand at the end of the second set. The Falcons won set three with a score of 10-25. The fourth set was a momentum struggle, but eventually the Falcons pulled ahead 21-23. Their lead did not last long when the Golden Wolves got a side out and went three straight points ending on a Messiah hitting error to win the fourth set 25-23 and forcing the Wolves’ favorite set five. Starting off on a 0-6 deficit, the Falcons came back within one point at 13-14. After a perfectly taken timeout by head coach Kelly Nicodemus, the Golden Wolves came out guns blazing and won the set off of a kill by Sipling. Just as you would imagine, it the team stormed the court, the crowd was on their feet, tears streamed from players’ faces, that’s a moment we will all remember. “My favorite moment was beating Messiah and everyone was just  so emotional and into the game, it was such a satisfying win. I wanted to beat the the last three years and we didn’t, we even lost in the beginning of the season and then coming back and inning was amazing,” senior McKenna Achenbach said.The next step of the MAC playoff tournament was playing #1 Stevenson University at home. The Mustangs continued their perfect conference play and won in straights sets, 12-25, 12-25, and 20-25. The Mustangs went on to win the MAC and play in the NCAA DIII tournament. The record-breaking season wasn’t over yet for the Golden Wolves, they earned a spot in the Eastern College Athletic Conference (ECAC) playoff tournament. “Making the MACs and ECACs this year was a result of the hard work the players put in every day on and off the court. However, getting so far this year is bittersweet because it only makes me hungry for the challenge of getting back into playoffs,” head coach Kelly Nicodemus said.ECAC Playoffs: Missing two key six-rotation players, juniors Laura Wachowicz and Emily Smith, the Golden Wolves started freshman Olivia Frutiger and sophomore Erika McKee. “I was confident going into the game. I mean I had to be confident and not focus on the shoes of the player that I was replacing,” Frutiger said. The Golden Wolves ended the season with a 0-3 loss to John Jay College. The Wolves ended the season with a record of 16-13.