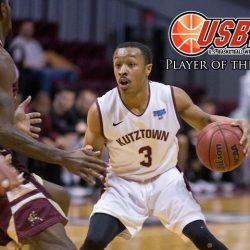 After a three-game week last week where he averaged 31 ppg, 5.3 apg and 61.5% shooting from three-point range, Ridgeway was honored as the week two Pennsylvania State Athletic Conference (PSAC) Eastern Division Men’s Basketball Co-Athlete of the Week on Monday afternoon by the league office.

The West Chester, Pa. native scored a career-high 40 points against California (Pa.) last Saturday, Nov. 18 and then followed that up the next day with a 30-point, nine-assist effort at Slippery Rock.

Ridgeway is averaging 24.3 points per game (2nd in the PSAC) and eight assists per game (1st in the PSAC). In the season-opening win against Penn State Schuylkill, he broke his previous school record with 16 assists in a game.