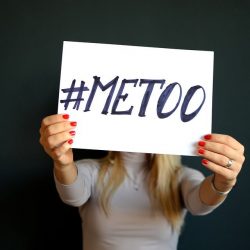 Upon recent internet travels, you may have stumbled across the hashtag #metoo on Facebook. The status is meant for women to speak up and end the stigma of sexual harassment and assault. Many women have shared the status and added their own story, ending with the hashtag, #metoo. The floodgates of support, from men and women who have or have not experienced sexual abuse, have opened up for these women who were bold enough to share their stories. However, some men have stepped forward with their own two cents to the story. Esther Lupton of facebook writes on a friend’s status, “No means NO, period.” replying to her friend who had asked if marital rape counted as sexual assault.

Among the men, there are the supporters, the victims, and the condemners. While most men are supporting these women and their traumatic pasts, some men have called the popular hashtag “a cry for attention’, feminist, and have even tried to disprove these women’s pasts. A handful of men have decided to take matters into their own hands to end the stigma that is “only women experience sexual harassment and assault”. They, in turn, have shared the status and came forward about their own stories. However, it is believed that men should be strong and defend themselves from abuse, so many of these men have dealt with bullying and cruel words from fellow men and even women, posted in their comment sections instead of support. Jon Nat Mercer writes under a post “Men, especially younger men and boys, get harassed and propositioned all the time by pedophiles trying to subvert them.”

The hashtag is sure to change the awkwardness floating around coming out about abuse. The social stigma must end. We can not assume that because someone is dressed a certain way, or because they said yes and then took it back, or because we are with someone or married to them, that their body automatically belongs to us. As Anna Binkovitz, a great public speaker for Button Poetry says “we must stop asking people’s clothing to have sex with us, and start asking people.”