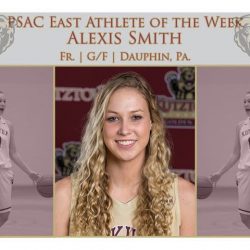 Smith went 5-of-13 from distance and a perfect 7-for-7 from the charity stripe, adding five rebounds, three steals and two assists in an efficient, stat-stuffing 20 minutes of game action.

The Central Dauphin-prep has led KU in scoring in three of its six games this season, posting team-high marks against Bowie State (11/10, Chestnut Hill (11/15) and PSULV (11/25). Smith’s season average of 10 points per game ranks second on the team behind fellow freshman Rylee Derr (11.5 ppg) and she leads the Golden Bears in free throws made and free throw percentage, knocking down 17-of-19 thus far at a 89.5 percent clip. Of all players in the PSAC averaging at least 10 ppg, Smith has played the fewest minutes of this group, averaging 10 ppg in just 14.8 minutes per contest off the bench.

The award for Smith is the first of her career and the first honoree for the Maroon and Gold this season.

Kutztown (3-3 overall, 0-2 PSAC) returns to action this Wednesday, Nov. 29 against Jefferson University. Tip-off is set for 7 p.m. in Keystone Arena.