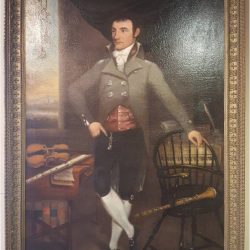 Born in 1749, Daniel Rose of Reading became a talented watch & clock maker capable of building musical mechanisms that few in America could rival. He also sold and repaired clocks, watches, and jewelry in addition to musical instruments. In 1775, Rose instructed the drummers and fifers of the 1st Battalion of the Berks County militia. The following year, he joined the Committee of Safety in Reading, and in 1777, was appointed a captain in the militia. He served in the State Legislature from 1799 -1804, 1806 – 1808 and 1811-1812. Rose even opened his own museum in Reading in his home on Penn Street. He was also a talented musician. At the time of his death in 1827, Rose owned two organs, a piano, clarinet, hautboy (oboe), bassoon, flute and a French horn.The Berks History Center Museum is home to several Rose tall case clocks and a full length portrait of the famous clockmaker. In the portrait, Daniel Rose is depicted as a dashing figure wearing his double-breasted coat and red silk vest by Jacob Witman. His hair is cut short and brushed forward in a style that became fashionable in the late 1790s. Rose is wearing an extensive amount of jewelry, which was all in the height of male fashion at the time, including oval knee buckles, steel cut shoe buckles, and a gold ring. Four musical instruments are also included in the portrait: a violin, flute, clarinet, and square piano. Look carefully at the piano to see where the artist, Jacob Whitman, cleverly painted his own name instead of that of the instrument maker.