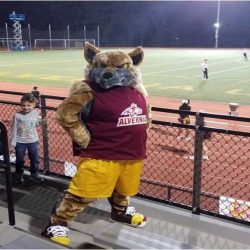 The Alvernia Crusaders are now a thing of the past. The university moving forward will be known as the Golden Wolves. The change was made after nearly 50 years of identifying as the Crusaders.

The change was brought to the board by the Bernadine sisters, who unanimously sponsored the name change. The reasoning behind the desire to change the name was because of the Franciscan values the University holds. The name “Crusaders” went against the University’s beliefs. St. Francis of Assisi changed the course of his life and had a spiritual journey by turning away from the crusades in an effort for peacemaking. The sisters wanted to change the name to stays true to the Franciscan mission.

Beginning in March 2017 a university task force was appointed to develop new name options. The task force was represented by students, faculty, athletic and other staff members, alumni, parents, trustees and Bernardine Sisters. The task force requested and received hundreds of submissions from the Alvernia community, with nearly one-third of the selections having variations of “wolves” in the name. The process did not take long to complete as the mascot name was announced on June 15, 2017.

A few months later, there was the unveiling of the new Golden Wolves logo on August 28, 2017. President Flynn explained the reasoning behind the mascot change for the university.

“Throughout the very inclusive process, our university community continuously emphasized the importance of having a new nickname directly connected to our distinctive Franciscan heritage,” Alvernia president Dr. Thomas F. Flynn said. “I’m very pleased that we’ve chosen such a powerful Franciscan symbol. The overwhelming support and consensus that emerged from across the university community regarding the selection has been impressive.”

Throughout campus, the change has been embraced by the student body since the announcement. Even students that were at the school for multiple years did not mind the change because there is more of an emotional attachment to the university itself, rather than the mascot.

“I think the transition was ultimately a good thing for our school. I did not have an emotional tie to the Crusader nickname itself,” Alvernia senior Andrew Cook said. I would much rather change the mascot to something that will not be controversial and bring potential negativity to the school’s name in the future. The new name fits perfectly with the history of St. Francis and I’m excited about the new era.”

As Alvernia is a Franciscan University, having a historical reference tied to the new mascot was important in the selection process. With the Golden Wolves mascot, there is history within the name. St. Francis of Assisi tamed a wolf that had been terrorizing the city in the early 13th Century. The story symbolizes the power of peacemaking, which is one of the school’s core values. Also by adding ‘golden’ to the name, it represents excellence and features one of the university’s traditional colors.

Students coming into the Alvernia community this year and beyond will have the opportunity to create a new legacy for the Golden Wolves name. One huge factor will be the addition of the new football program, beginning next fall.

“I am thankful that I get to be the first generation of Golden Wolves here at Alvernia. I think this change is great for the University,” Alvernia freshman Chris Mundell said. “By changing the name, I believe it provides a fresh start for the school, especially with the new football program starting next year. It was the perfect time to make the change, and I think it will help attract new students as well.”